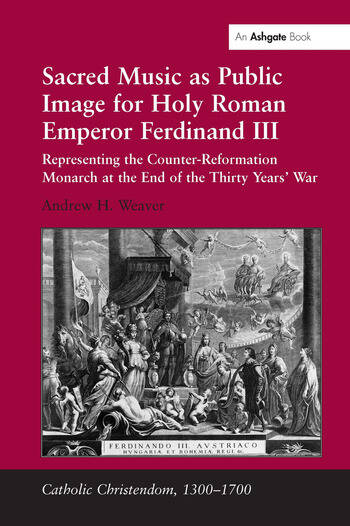 Sacred Music as Public Image for Holy Roman Emperor Ferdinand III: Representing the Counter-Reformation Monarch at the End of the Thirty Years' War

Ferdinand III played a crucial role both in helping to end the Thirty Years' War and in re-establishing Habsburg sovereignty within his hereditary lands, and yet he remains one of the most neglected of all Habsburg emperors. The underlying premise of Sacred Music as Public Image for Holy Roman Emperor Ferdinand III is that Ferdinand's accomplishments came not through diplomacy or strong leadership but primarily through a skillful manipulation of the arts, through which he communicated important messages to his subjects and secured their allegiance to the Catholic Church. An important locus for cultural activity at court, especially as related to the Habsburgs' political power, was the Emperor's public image. Ferdinand III offers a fascinating case study in monarchical representation, for the war necessitated that he revise the image he had cultivated at the beginning of his reign, that of a powerful, victorious warrior. Weaver argues that by focusing on the patronage of sacred music (rather than the more traditional visual and theatrical means of representation), Ferdinand III was able to uphold his reputation as a pious Catholic reformer and subtly revise his triumphant martial image without sacrificing his power, while also achieving his Counter-Reformation goal of unifying his hereditary lands under the Catholic church. Drawing upon recent methodological approaches to the representation of other early modern monarchs, as well as upon the theory of confessionalization, this book places the sacred vocal music composed by imperial musicians into the rich cultural, political, and religious contexts of mid-seventeenth-century Central Europe. The book incorporates dramatic productions such as opera, oratorio, and Jesuit drama (as well as works in other media), but the primary focus is the more numerous and more frequently performed Latin-texted paraliturgical genre of the motet, which has generally not been considered by scholars as a vehicle for monarchical representation. By examining the representation of this little-studied emperor during a crucial time in European history, this book opens a window into the unique world view of the Habsburgs, allowing for a previously untold narrative of the end of the Thirty Years' War as seen through the eyes of this important ruling family.

Andrew H. Weaver is Associate Professor and Chair of Musicology at the Benjamin T. Rome School of Music, the Catholic University of America, USA. He has also published editions of musical works by Ferdinand III, Giovanni Felice Sances, and other musicians from the Habsburg court.

'Richly illustrated with visual images and musical examples, this broad-based, fascinating and thoroughly researched study examines the ways in which the Habsburg Emperor Ferdinand III (r. 1637-1657) employed sacred music and other arts to project an image of himself as a champion of Catholic piety, a warrior for the Empire, and eventually as a peacemaker during the last stage of the Thirty Years' War.' Jeffrey Kurtzman, Washington University in St. Louis, USA

'Sacred Music as Public Image for Holy Roman Emperor Ferdinand III is a unique exploration of the nexus between art and politics. Combining the tools of social and political history, virtuosic archival work, and deft musical analysis, Andrew Weaver shows how Ferdinand III used sacred music to propagate, and later, to revise a triumphant, martial public persona during the Thirty Years' War. His insightful work illuminates early modern sacred music, Catholic devotional practices, the history of printing, and - most significantly - the ways in which a world leader sought to shape his own public image.' Steven E. Saunders, Colby College, USA

'Andrew H. Weaver’s lucid, jargon-free and admirably interdisciplinary study places the much-maligned younger Ferdinand in a new light... a book that will quickly establish itself as essential reading for anyone concerned with 17th -century Austria... Altogether a delight, this book should appeal not only to specialists but to everyone with an interest in Catholic Church music of the period.' Early Music Review

'... Weaver’s inspired scholarship stands as a valuable and exemplary model for further inquiry into the role of monarchical representation in sacred music of the seventeenth century.' Renaissance Quarterly

'In drawing on recent research by scholars of early modern history, Weaver brings to musicology a number of valuable concepts, such as monarchical representation (itself the subject of a far-reaching dialogue) as a negotiation between ruler and subjects, and the "top-down" approach. Weaver’ s exploration of the paratext, and his use of such material, provides a useful model for further research. His engagement with a range of different media, with circumstances of representation, and with a creative variety of written sources, positions the music in its cultural context, making this an important study for understanding how it was used and perceived.' Seventeenth-Century Music