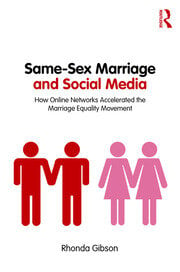 According to polls, from the early noughties to now, public support for same-sex marriage has increased dramatically. Same-Sex Marriage and Social Media asks how such a rate of attitude change came about and, more specifically, what role social media played.

Digital platforms like Facebook, Twitter and YouTube have proved to be useful outlets for political expression, and Rhonda Gibson explores how this came to benefit the marriage equality movement. Drawing on a wealth of movement-related discourse, the book looks at:

This book seeks to demonstrate how the unique ability of social networks to share personal stories on a mass scale, connect like-minded individuals regardless of geography, and leverage the bandwagon effect of viral content contributed to a seismic shift in visibility and public opinion around the issue of marriage equality. Students and researchers will find this a timely and accessible introduction to the impact of online networks on LGBTQ rights.

is Associate Professor and Program Director of the Master of Arts in Technology and Communication in the School of Media and Journalism at the University North Carolina at Chapel Hill, USA. Her research focuses on the media portrayal of sexual and gender minorities.

"Rhonda Gibson has produced a work of cutting-edge scholarship that is both readable and rigorous. While many scholars have investigated and written about the issue of marriage equality, this book moves the topic forward by focusing on how social media impacted the passage of same-sex marriage and equal rights for members of LGBT communities. Rhonda Gibson provides a comprehensive history of marriage equality, the religious right’s fight against same sex marriage, how newsrooms covered the issue, as well as queer resistance to same sex marriage. She analyzes various messaging strategies used throughout the years, then tackles how social media networks helped produce a social climate that helped convince citizens that the time was right for same sex marriage."