Schelling, Freud, and the Philosophical Foundations of Psychoanalysis
Uncanny Belonging 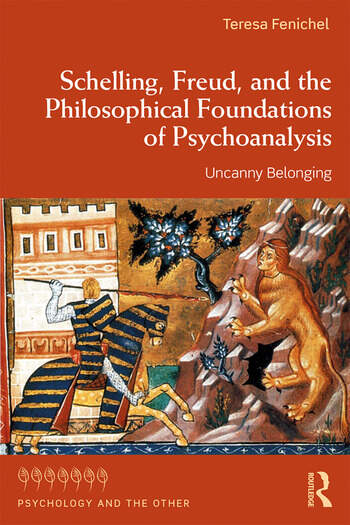 Schelling, Freud, and the Philosophical Foundations of Psychoanalysis: Uncanny Belonging

Schelling, Freud, and the Philosophical Foundations of Psychoanalysis provides a long-overdue dialogue between two seminal thinkers, Schelling and Freud. Through a sustained reading of the sublime, mythology, the uncanny, and freedom, this book provokes the reader to retrieve and revive the shared roots of philosophy and psychoanalysis.

Teresa Fenichel examines the philosophical basis for the concepts of the unconscious and for the nature of human freedom on which psychoanalysis rests. Drawing on the work of German philosopher F. W. J. Schelling, the author explores how his philosophical understanding of human actions, based as it was on the ideas of drives, informed and helped shape Freud’s work. Fenichel also stresses the philosophical weight of Freudian psychoanalysis, specifically in regards to the problem of freedom and argues that psychoanalysis complicates and reinforces Schelling’s basic idea: to know reality we must engage with the world empathetically and intimately.

This book also serves as an introduction to Schelling’s thought, arguing that his metaphysics—particularly concerning the primacy of the unconscious and of fantasy—can be read as a therapeutic endeavor. Finally, the book offers a deep rethinking of the action and nature of sublimation through both Freud’s and Schelling’s texts. Fenichel suggests psychoanalytic therapy is self-interpretation—a recognition of our narratives as narratives, without for that reason taking them any less seriously.

Schelling, Freud, and the Philosophical Foundations of Psychoanalysis

will be of great interest to psychoanalysts and psychoanalytic psychotherapists as well as scholars of philosophy.

Teresa Fenichel is a visiting assistant professor at the College of the Holy Cross in Worcester, MA, USA. Her research interests include German idealism, psychoanalysis, feminist philosophy, and aesthetics.

"Circling around the questions of truth and freedom and across the very core of these questions, Teresa Fenichel stages a confrontation, which is equally a supplementation, between Schelling and Freud. She shows how Schelling's philosophy of the unruly ground broaches a more complex conception of the unconscious, while Freud's thought, in a space beyond his objectivism, concretizes Schelling's speculative initiatives. Teresa Fenichel's brilliant and creative work not only exposes but also provokes this profound encounter between philosophy and psychoanalysis."-John Sallis, Frederick J. Adelmann S.J. Professor of Philosophy, Boston College, USA

"This book is a highly compelling study of Freud and Schelling in search of the philosophical soul of psychoanalysis and the psychoanalytic heart of philosophy. Freud’s declared scientism veils an approach in which reality engages with the world necessarily by way of fantasy; Schelling’s philosophy implies that we can know reality, which includes ourselves, only through an engagement with its strange uncanniness. In this beautifully written book, Fenichel reveals a new way to make philosophy and psychoanalysis converse."-Russell Grigg, author of Lacan, Language and Philosophy

"Fenichel's crossing of Freud and Schelling produces a startling mongrel of thought. Her bold exposure of 'uncanny belonging' between these two giant thinkers of freedom, play, imagination and myth is an extraordinary feat of scholarship and insight. The book is both challenging and riveting - one cannot help turning the page and is richly rewarded for doing so."-Richard Kearney, Charles Seelig Chair of Philosophy, Boston College, USA

"If nihilism, as Nietzsche stated, is the "uncanniest of guests," it is so not because it unveils the uncanny but because it covers it over, even to the point of dissolving it completely with the help of one benzodiazepine or the other, the pharmaceutical take on modernity’s distinctive blend of dull everydayness and the self-evidence of reason. This bold and ambitious book represents Teresa Fenichel’s gritty determination to combat nihilism by rehabilitating the oldest but most difficult form of therapy. Championed by practitioners from Freud to Julia Kristeva, it can be characterized as the simple resolve to live in the truth, and above all in the truth of truth’s flaming center, the sheer uncanny fact that being is. That truth is what is at issue here is the justification for Fenichel’s decision to interpret Freudian psychoanalysis through the lens of Schelling’s metaphysics of the unconscious. Uncanny truth is not, however, the last word, for the mystery of life is that it brings with it the possibility of an uncanny belonging. Just as we belong to one another in love, we belong to everything that exists in the shared fragility of a mortality that is always a blessing and a curse."-Joseph P. Lawrence, author of Schellings Philosophie des ewigen Anfangs