Schooling and Social Change Since 1760
Creating Inequalities through Education 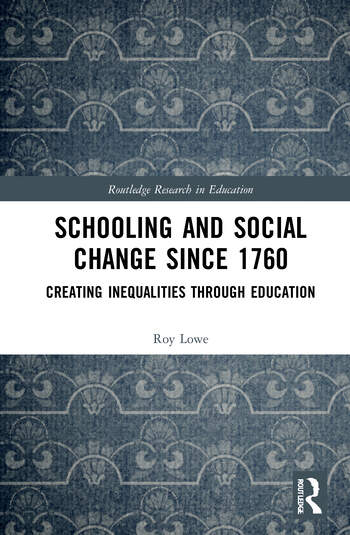 Schooling and Social Change Since 1760: Creating Inequalities through Education

Schooling and Social Change in England since 1760 offers a powerful critique of the situation of British education system today and shows the historical processes which have helped generate the crisis confronting policymakers and practitioners at the present time.

The book identifies the key phases of economic and social change since 1760 and shows how the education system has played a central role in embedding, sustaining and deepening social distinctions in Britain. Covering the whole period since the first industrialization, it gives a detailed account of the development of a deeply divided education system which leads to quite separate lifestyles for those from differing backgrounds. The book develops arguments of inequalities through a much-needed account of the changes in education.

This book will be of great interest for academics, scholars and post graduate students in the field of history of education and education politics. It will also appeal to administrators, teachers and policy makers, especially those interested in the historical development of schooling.

Education in England: intentions and outcomes

The characteristics of English society

The ever-whirling wheel of Change’

Schooling in the Eighteenth Century

A new context for education

Evangelicals and the Sunday school movement

The beginnings of systematisation: the monitorial schools

The first stirrings of the State

‘In a progressive country change is constant’

‘Governing as little as they could’: schooling the poor in Victorian England

Systematising superiority: the education of a new elite

Creating a new middle class: the reform of the endowed schools

‘Places of moral rather than intellectual training’: the schooling of middle

The origins of charitable status

The need for change

‘A great concession’: the establishment of the Charity Commission

The formative years of the Charity Commission

A new administration for education

Towards a new elementary education

War and its aftermath

Gradations of schooling: educating elites between the Wars

Schooling during the Second World War

‘The search for freedom from want’: the post-War years

The primary concern: building a new sector of education

do so’: the post-War expansion of higher education

A note of caution

Chapter 7: Neo-Liberalism and multi-nationalism: 1979 to the present

Implementing the new politics of education

The realities of change: the primary sector

The outsourcing of secondary education

How higher education was marketized

Roy Lowe is one of Britain’s best-known historians of education, having published extensively over a long period on the history of schools and universities. He was for some years President of the UK History of Education Society and was awarded an OBE for services to education in 2002.

"This book performs the important civic service of showing the ways in which the English education system has worked consistently for over two centuries to sustain and reinforce those inequalities which continue to be such a marked feature of contemporary English society. Clearly written and well-organised, the detailed narrative shows fully how the careful and critical study of education over the long term is such a valuable perspective from which to study British society."

Simon Szreter, Professor of History and Policy, University of Cambridge.

''An essential guide to the troubling history of educational inequalities in the UK and how they explain our contemporary social problems.''