Science, Empire and the European Exploration of the Pacific 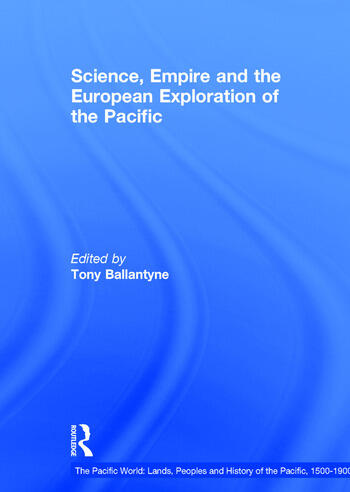 Science, Empire and the European Exploration of the Pacific

This collection of essays assesses the interrelationship between exploration, empire-building and science in the opening up of the Pacific Ocean by Europeans between the early 16th and mid-19th century. It explores both the role of various sciences in enabling European imperial projects in the region, and how the exploration of the Pacific in turn shaped emergent scientific disciplines and their claims to authority within Europe. Drawing on a range of disciplines (from the history of science to geography, imperial history to literary criticism), this volume examines the place of science in cross-cultural encounters, the history of cartography in Oceania, shifting understandings of race and cultural difference in the Pacific, and the place of ships, books and instruments in the culture of science. It reveals the exchanges and networks that connected British, French, Spanish and Russian scientific traditions, even in the midst of imperial competition, and the ways in which findings in diverse fields, from cartography to zoology, botany to anthropology, were disseminated and crafted into an increasingly coherent image of the Pacific, its resources, peoples, and histories. This is a significant body of scholarship that offers many important insights for anthropologists and geographers, as well as for historians of science and European imperialism.

Contents: Introduction. Part 1 Visions of the Pacific: 'South Sea' to 'Pacific Ocean', O.H.K Spate; Mercator's southern continent: its origins, influence and gradual demise, W.A.R. Richardson; Shared vision: Herman Moll and his circle and the Great South Sea, Dennis Reinhartz. Part 2 The Imperial Sciences Of Exploration: Finding the way home: Spanish exploration of the round-trip route across the Pacific Ocean, Harry Kelsey; 18th century science and the voyages of discovery, J.C. Beaglehole; A Royal Society appointment with Venus in 1769: the voyage of Cook and Banks in the Endeavour, 1768-71 and its botanical results, William T. Stearn; The ship as a scientific instrument in the 18th century, Richard Sorrenson; Banks, Bligh and breadfruit, David Mackay; Scientific books and instruments for an 18th-century voyage around the world: Antonio Pineda and the Malaspina expedition, Barbara G. Beddall; Of fish and men: Spanish marine science during the late 18th century, Iris H. Wilson Engstrand; The search for a sea passage from the Atlantic Ocean to the Pacific via North America's coast: on the history of a scientific competition, Alexei V. Postnikov. Part 3 Cultural Contact, Comparison And Classification: (En)-countering knowledge traditions: the story of Cook and Tupaia, David Turnbull; 'Le Président des Terres Australes': Charles de Brosses and the French enlightenment beginnings of oceanic anthropology, Tom Ryan; Seamen and philosophers in the South Seas in the age of Captain Cook, Glyndwr Williams; Melanesians and Polynesians: ethnic typifications inside and outside anthropology, Nicholas Thomas; The 'oriental renaissance' in the Pacific: orientalism, language and ethnogenesis in the British Pacific, Tony Ballantyne; Minute particulars and the representation of South Pacific discovery, Jonathan Lamb. Index.

'... the introduction provides a welcome synthesis...' Archives of Natural History 'This volume of reprinted essays serves as an excellent sampling of the historiography of Pacific science and its development from the late 1960s to the present... This collection holds together very successfully and is introduced excellently; it will be an important resource for all historians of science and empire.' British Journal for the History of Science