Science and Beliefs
From Natural Philosophy to Natural Science, 1700â€“1900 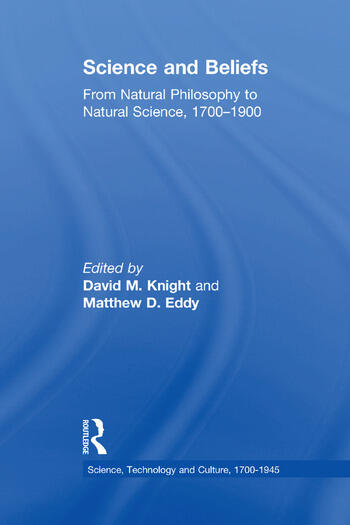 Science and Beliefs: From Natural Philosophy to Natural Science, 1700â€“1900

The years between 1700 and 1900 witnessed a fundamental transition in attitudes towards science, as earlier concepts of natural philosophy were replaced with a more modern conception of science. This process was by no means a simple progression, and the changing attitudes to science was marked by bitter arguments and fundamental differences of opinion, many of which are still not entirely resolved today. Approaching the subject from a number of cultural angles, the essays in this volume explore the fluid relationship between science and belief during this crucial period, and help to trace the development of science as an independent field of study that did not look to religion to provide answers to the workings of the universe. Taking a broadly chronological approach, each essay in this book addresses a theme that helps illuminate these concerns and highlights how beliefs - both religious and secular - have impinged and influenced the scientific world. By addressing such key issues such as the ongoing debate between Christian fundamentalists and followers of Darwin, and the rise of 'respectable atheism', fascinating insights are provided that help to chart the ever-shifting discourse of science and beliefs.

â€™As a whole, this collection of essays gives interesting insight into the current state of studies in 'Science and Religion'.â€™ Nuncius â€™It was a pleasure to read this book.â€™ Ambix