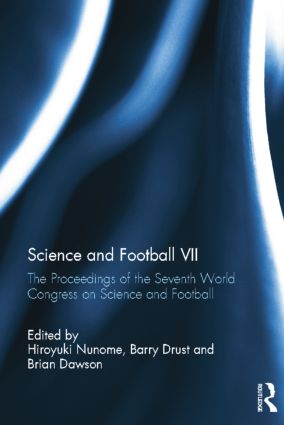 The Proceedings of the Seventh World Congress on Science and Football, 1st Edition

Science and Football VII showcases the very latest scientific research into the variety of sports known as ‘football’. These include soccer, the national codes (American football, Australian rules football and Gaelic football), and the rugby codes (union and league). Bridging the gap between theory and practice, this book is by far the most comprehensive collection of current research into football, presenting important new work in key areas such as:

Hiroyuki (Hiro) Nunome is Associate Professor in Biomechanics at Nagoya University, Japan. He is part of the International Steering Group on Science and Football and is the Vice President of the Japanese Society of Science and Football. He is well-known as a pioneer of biomechanics in soccer, particularly of kicking, with many advanced publications in the field.

Barry Drust is Reader in Applied Exercise Physiology at Liverpool John Moores University, UK. His main research interests are focused on the physiology of intermittent exercise. As well as his academic roles he has also provided sport science support to elite Premier League football teams and national associations.

Brian Dawson is Professor of Sport/Exercise Physiology in the School of Sport Science, Exercise and Health at the University of Western Australia. He is also Chair of the International Steering Group on Science and Football. He has published around 200 papers, many concerning physiology in football codes and other team sports.