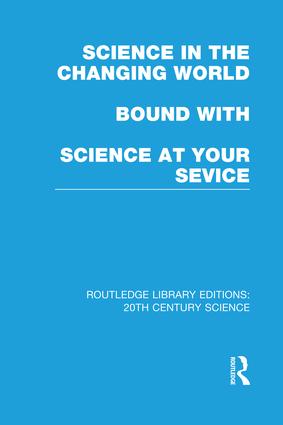 Science in the Changing World bound with Science at Your Service

Science in the Changing World, first published in 1933, contains a series of broadcasted presentations on the relationship between science and the development of European civilisation in the first half of the 20th century. Specifically, each talk attempts to reflect the crisis through which the world seemed to be passing at the time, and to make an analysis of those forces of transformation in science, art, economics, and social life which were associated most closely with the advent of the ‘scientific’ century. Included among the presenters are such eminent and diverse thinkers as Julian Huxley, Bertrand Russell and Hilaire Belloc.

Science at Your Service: First published in 1945, this collection of twelve BBC broadcasts focuses on the influence of science in everyday life, and demonstrates that not all science is remote and theoretical. Each speaker deals with some aspect of mid-20th century scientific advance as it related to subjects of practical importance, from textiles and tunnels to fishing and ship design. Offering a glimpse into the attitudes towards science current in the middle of the Second World War, this brief and accessible collection will be of interest to cultural historians as well as to the general science enthusiast.

Science in the Changing World:

Introduction Thomas Holland Part 1: What Is Science? H. Levy 1. The Paradox of Science 2. Science in Revolt 3. Science in Action 4. Is the Universe Mysterious? 5. Science – Disruptive and Constructive? 6. Everyone a Scientist Part 2: What is Man? 1. Man as a Relative Being Julian Huxley 2. Our Place in Nature John R. Baker 3. Missing Links John R. Baker 4. The Evolution of Mind John R. Baker 5. The Control of Development John R. Baker 6. Man and Reality Julian Huxley Part 3: What is Civilization? 1. The Scientific Society Bertrand Russell 2. Economists, Scientists, and Humanists Aldous Huxley 3. Science and the Self Hugh I’A. Fausset 4. Man and the Machine Hilaire Belloc 5. The Spirit of Science Oliver Lodge

Science at Your Service:

Reissuing works originally published between 1921 and 1988, this set offers a selection of scholarship covering historical developments in scientific thinking. Volumes range from Einstein's theories to quantum theory and genetics making this a comprehensive collection of previously out-of-print works. Many of the works review scientific advances in general or science and philosophy at the time; a great insight into the intellectual world of the 20th Century.