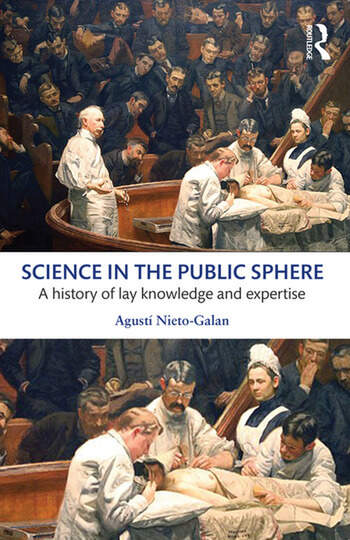 Science in the Public Sphere: A history of lay knowledge and expertise

Science in the Public Sphere presents a broad yet detailed picture of the history of science popularization from the Renaissance to the twenty-first century. Global in focus, it provides an original theoretical framework for analysing the political load of science as an instrument of cultural hegemony and giving a voice to expert and lay protagonists throughout history.

Organised into a series of thematic chapters spanning diverse periods and places, this book covers subjects such as the representations of science in print, the media, classrooms and museums, orthodox and heterodox practices, the intersection of the history of science with the history of technology, and the ways in which public opinion and scientific expertise have influenced and shaped one another across the centuries. It concludes by introducing the "participatory turn" of the twenty-first century, a new paradigm of science popularization and a new way of understanding the construction of knowledge.

Highly illustrated throughout and covering the recent historiographical scholarship on the subject, this book is valuable reading for students, historians, science communicators, and all those interested in the history of science and its relationship with the public sphere.

Agustí Nieto-Galan is a professor of History of Science, and Director of the Centre d’Història de la Ciència (CEHIC) at the Universitat Autònoma de Barcelona (UAB). He has written widely on the history of chemistry and natural dyestuffs, and on the history of science popularization (eighteenth to twentieth centuries). His publications include Barcelona: An urban history of science and modernity: 1888-1929 (co-editor, 2015) and Popularizing Science and Technology in the European Periphery, 1800-2000 (co-editor, 2009).

"In deftly written case-studies, Agustí Nieto-Galan guides the reader through the complex public sphere of western science as it has evolved since the Renaissance. The book’s combination of scholarly authority, a consistently international perspective, and sharp analysis marks it as a landmark study. In addition to offering a much-needed historical account, Science in the Public Sphere raises important issues for those engaged in popularisation in our own age of widespread discontent with the culture of science. This is big-picture writing of the highest order."

"In this insightful and fascinating book, Agusti Nieto-Galan provides the first comprehensive account of the growth and establishment of scientific culture. This is not a book about science, therefore, but about its popularisation, its emergence to a dominant position in the public sphere, and its increasing impact upon all walks of life. To know ourselves, we need to know about the culture of science and this book is an indispensable guide."

"In this fascinating book, Agusti Nieto-Galan draws on experience of a wide range of countries and publics to show how this top-down popularization did not work. The public was not as stupid as had been imagined: scientists found that they were not uncritically respected but had to engage properly and justify themselves - and the place of science, essential but distrusted, in our world has become more contentious and more interesting. The book is an eye-opener."

"Science in the Public Sphere is a book about the many actors that contribute to shape science through networks of communication that transcend the outdated model of top-down popularization. Drawing on a vast pool of case studies from both the so-called scientific centres and the peripheries, Nieto-Galán brilliantly illustrates Ludwig Fleck’s idea that every single event of scientific communication actually constructs science. I strongly recommend this book not only to historians of science but also to journalsits, science policy-makers and anyone interested in the intricate relations between science and society."

"Nieto-Galan begins with an ambitious endeavor and follows through well. He thoughtfully handles the interactions of the lay public and the scientific establishment. This work is an excellent discourse on the interplay and the ebb and flow of scientific discovery, as well as the results of those discoveries...The thoughts expressed within the work will be of particular interest in modern society. Summing Up: Recommended"