Seafaring in the Arabian Gulf and Oman
People of the Dhow 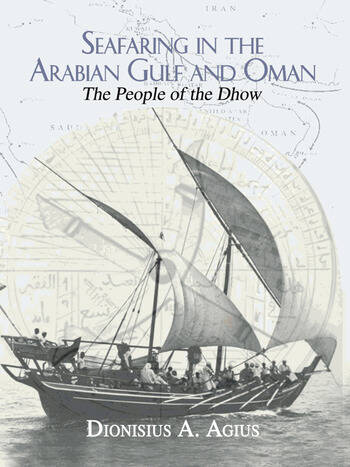 Seafaring in the Arabian Gulf and Oman: People of the Dhow

This book is a study of the seafaring communities of the Arabian Gulf and Oman in the past 150 years. It analyses the significance of the dhow and how coastal communities interacted throughout their long tradition of seafaring.

In addition to archival material, the work is based on extensive field research in which the voices of seamen were recorded in over 200 interviews. The book provides an integrated study of dhow activity in the area concerned and examines the consciousness of belonging to the wider culture of the Indian ocean as it is expressed in boat-building traditions, navigational techniques, crew organisation and port towns.

People of the Dhow brings together the different measures of time past, the sea, its people and their material culture. The Arabian Gulf and Oman have traditionally shared a common destiny within the Western Indian Ocean. The seasonal monsoonal winds were fundamental to the physical and human unities of the seafaring communities, producing a way of life in harmony with the natural world, a world which was abruptly changed with the discovery of oil. What remains is memories of a seafaring past, a history of traditions and customs recorded here in the recollections of a dying generation and in the rich artistic heritage of the region.

The book was awarded a major prize in 2006 by the Abdullah Al-Mubarak Al-Sabah Foundation and the British-Kuwait Friendship Society for the best scholarly work on the Middle East published in the UK in 2005 and is one of the most significant and prestigious awards in this field.

1. The Present Study  2. The Dhow  3. The Northern Arabian Gulf and the People of the Sea  4. Oman and its Seafarers: Gateway to the Indian Ocean  5. The Dhow Industry  6. The Routes to West India  7. The Crew of an Ocean-going Dhow  8. The Pearldivers and Crew  9. The Principles of Navigation  10. Getting Ready: Steering and Rigging  11. Braving the Winds  12. The Sea: Portraying the Reality

Dionisius A. Agius is Professor of Arabic and Islamic Material Culture at the University of Exeter, with a special interest in maritime culture and ethnography. He is currently working on traditional dhow-building, dhow-types, sea trade and seafaring communities of the Red Sea region. He is co-editor (with Richard Hitchcock) of The Arab Influence in Medieval Europe (1996); author of In the Wake of the Dhow: The Arabian Gulf and Oman (2002) and Classic Ships of Islam: From Mesopotamia to the Indian Ocean (2008).

"A well-balanced fusion of literary sources, oral testimony and published volumes … Besides offering the reader a comprehensive overview of the maritime world and culture of the Arabian Gulf, it is also a precious record of a fast-disappearing world." - Timothy Gambin, International Journal of Nautical Archaeology, 35, ii (2006): 347-348.

"Equally important is the contribution it makes to the reconstruction of Arab seafaring by offering a well-researched and well-documented study on Muslim Arab seafaring in the Gulf and the Indian Ocean, one which will now be relevant to further comparative studies of the Arabs’ Mediterranean activities". - Maya Shatzmiller, Bulletin of the Society for Arabian Studies, 11 (2006): 48-49.

"This is a very handsome book with ample illustrations, tables and maps … I can only laud the fine scholarly efforts, in the field and in the library, of the author … He has much in his writing of material culture and is at his best when he is explaining it to us, as throughout this book" - G. Rex Smith, Journal of Semitic Studies, 52, i [2007]: 176-7.

"A stimulating and valuable account of a fading maritime culture, that brings life to the people of the dhow." - Lucy Blue, Centre for Maritime Studies, Department of Archaeology, University of Southampton.

"Wonderful, enthralling ... Based on fieldwork among surviving sailors, merchants and shipwrights from Kuwait to Oman, this is an invaluable account of the dhows of the Arabian/Persian Gulf and the men who sailed them.  Agius has combined oral history with a deep knowledge of written sources to give us a vivid and unforgettable picture of a world that is on the  point of vanishing forever - to our great loss." - Paul Lunde, Historian, Civilizations in Contact, Golden Web Foundation, University of Cambridge.

“Agius’ contribution is important as he succeeds in portraying (through some 200 interviews) this part of the world before the discovery of oil; the patterns of life; the social conditions, the multiplicities of trade and cultural interactions among different communities so divided but so similar at the same time." - Beatrice Nicoline, Middle East Studies Association Bulletin, 40/2 [2006]: 235-6.