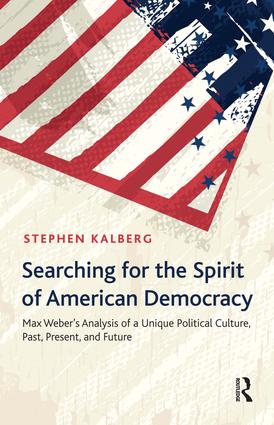 Searching for the Spirit of American Democracy

The 'crisis of American democracy' debate is advanced in this engaging new contribution. By referring to Max Weber's long-term perspective, Stephen Karlberg provides rich new insights into the particular contours of today's American political culture - and some reasons for optimism. Kalberg draws upon Weber to reconstruct political culture in ways that define America's unique spirit of democracy. Developing several Weber-inspired models, the author reveals patterns of oscillation in American history. Can these pendulum movements sustain today the symbiotic dualism that earlier invigorated American democracy? Can they do so to such an extent that the American spirit of democracy is rejuvenated? Whilst exploring whether Weber's explanations and insights can be generalised beyond the American case, 'Searching for the Spirit of American Democracy' forcefully argues that facilitating political cultures is indispensable if democracies are to endure.

“In sum, Kalberg accomplishes a rare feat: to infuse a long-standing and seemingly stale debate on the content of Weber’s thought and its merits with startling new insights that show how, in novel ways, to bring back to life the ideas of a man who died almost 100 years ago…Weberians and non-Weberians alike, take notice.”

"In this gem of a book Stephen Kalberg relies on Max Weber to unravel the historical roots of American political culture. The spirit of American democracy has been marked by a pendulum swinging between the poles of self-reliance and civic engagement. This concise and weighty book offers insight and illumination as we ponder whether polarization is all that is left when the pendulum stops moving."

In a gestalt switch from the usual application of Weber's Protestant Ethic to capitalist development, Kalberg shows how it explains American politics. It could well be titled "The Protestant Ethic and the Spirit of Democracy." Ascetic Protestants work out their salvation in America not just in an individual work ethic but by actively participating in a civic sphere of good will, egalitarianism, and public responsibility. Then ensues an historic drama: value-motivated carriers transport the spirit of democracy across the generations, but buffeted by growing forces of self-propelling capitalism and bureaucracy. As the civic sphere is undermined, American individualism turns into private channels of practical and personal concerns. Skeptical that the unique American pathway to the spirit of democracy can be generalized elsewhere in the world, nevertheless Kalberg finds the moral concerns of American politics still alive in recent elections. A book of political-historical sophistication exemplary of the spirit of Weber himself.

“Stephen Kalberg has developed a beautifully relevant Weberian analysis of the conflicted trajectory of contemporary American society. He accomplishes this with a concise text that nevertheless leaves nothing out, except the tedium of scholasticism. Kalberg is especially luminous in his treatment of the translation of the ethical individualism into a secular creed sustained by the densely populated world of politically interested civic organizations, his exploration of the ways this morally animated civil society has been a force against the iron cage of an increasingly bureaucratized political economy, and his sensitive analysis of why the reproduction of this civilizing force is fragile and problematic in the twenty-first century.”

"One of today's leading Weberian scholars mines Max Weber's theoretical work and his mode of analysis in highly creative ways to shed new light on America's political culture and its raging political crises. A strong political culture is shown to have existed in the United States, but its continued viability is not guaranteed. Stephen Kalberg has created a model of how to use a rigorous classical social theory to create a new and deeper understanding of political culture, its crises and the contemporary world more generally.

Introduction A) The Political Culture Approach and the Spirit of American Democracy B) Toward Max Weber: The Past, Present, and Future of the American Political Culture C) The American Political Culture's Central Contours and Long-Range Pathways D) An Overview Chapter 1 The Foundations I: The Ascetic Protestant Cornerstones of the Early American Political Culture A) World-Mastery Individualism: Religious Origins B) Community Activism: Religious Origins 1) Creating the Kingdom of God 2) The Ethical Community: The Congregation Chapter 2 The Foundations II: The Protestant Sects in the American Colonies and the Early United States A) Beyond The Protestant Ethic: The Protestant Sect B) Sect and Church C) The Sect's Social-Psychological Dynamic: "Holding Your Own": Individualism, Conformity, and the Methodical-Rational Organization of Life D) The Puritan Sects: Democratic Governance, Freedom of Conscience, and the Opposition to Secular Authority Chapter 3 The "Eminent Power" of the American Political Culture to Form Groups: From Sects to Civic Associations, the Civic Sphere and Practical-Ethical Action in the Nineteenth Century A) "American Society Is Not a Sandpile" B) The Expansion of the Congregation's Values into Communities and the Formation of a Civic Sphere C) The Maintenance of Public Ideals and Civic Ethics: Practical-Ethical Action and the New Symbiotic Dualism Chapter 4 The Political Culture of the Late Nineteenth and Early Twentieth Centuries: The Strong Individual-Small-State Constellation A) The View of the State in Industrializing America B) Isolating American Uniqueness: The View of the State in Industrializing Germany and the Divergent Location of Practical-Ethical Action Chapter 5 The Weberian Model: The Dissolution of the American Civic Sphere in the Twentieth Century A) The Modern World: An Iron Cage? B) The Weberian Model: The Dissolution of the Civic Sphere 1) The Privatization of Work and the Expansion of Practical Rationalism 2) The Circumscription of the Civic Sphere by "Europeanization" 3) The Circumscription of the Civic Sphere by the "Power of Material Goods" Chapter 6: Complementary Models: Extending the Weberian Model A) The Generalization Model: The Civic Sphere's Longevity 1) The Role of Moral Values in the 2004 Presidential Election B) The Professional Associations Model: The Relocation and Narrowing of the Sect Legacy C) The Conflict Model: The Contested Civic Sphere Chapter 7: Conclusion: Max Weber's Analysis of the Spirit of American Democracy A) Reviewing the Argument 1) A Colonial Era Symbiotic Dualism 2) The Nineteenth Century: Civic Individualism and a New Symbiotic Dualism B) Lessons from the Unusual American Case? C) The Weberian Mode of Analysis: Studying Political Cultures Appendices I The America Journey: Observations and Ramifications II The Protestant Ethic and the Spirit of Capitalism: A Brief Summary Glossary, Bibliography, Index