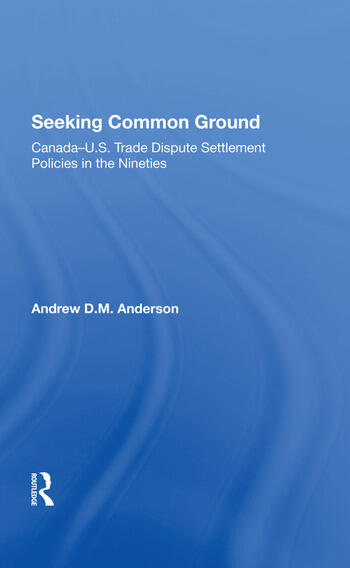 On January 1, 1989 the Canadian government began to implement the free trade deal that it had completed with the Government of the United States on October 4, 1987. Before signing the Canada-U.S. Free Trade Agreement (FTA) the Canadian government had sought exemption from the use by the United States of its ‘unfair’ trade law system of anti-dumping (AD) and countervailing duties (CVDs). While the U.S. ‘unfair’ trade law system is presumed to be based on principles agreed to in the General Agreement on Tariffs and Trade (GATT), economists, and other scholars, have contended that the system is not being applied properly; by reducing the harm caused by the margin of the foreigners' subsidy or dumping practices. Instead, it is being used to provide shelter to U.S. based corporations and industries seeking import relief, where shelter represents a type of administered trade protection, since the actions are undertaken and paid for by the U.S. government. This abuse came to represent a serious problem for Canadian producers in the1980s, who are extremely reliant on exports to the United States. To an increasing degree they believed they had become the target of U.S. trade law actions by their U.S. competitors. The United States was, however, not prepared to eliminate its ‘unfair’ trade law system for Canada, but instead, agreed to the setting up of two dispute settlement mechanisms (DSMs) where Canadian and American citizens could sit on binational panels to hear the final review of complaints lodged against the administrative agencies actions in either country on AD and CVD cases under Chapter Nineteen of the FTA or on general trade disputes under Chapter Eighteen of the FTA. This book critically examines the development and implementation of these two DSMs over the January 1, 1989 to August 15, 1994 period. It also provides a broader analysis of the issues surrounding the problems of the application of the ‘unfair’ trade laws, by examining the Canada-U.S. FTA's DSM systems against the present use by Canada and the United States of the procedures available under the 1979 GATT Subsidies Code. It also examines the changes that have been made in the 1994 GATT Subsidies Code and the North American Free Trade Agreement (NAFTA) which has incorporated, with revisions, Chapter Eighteen and Nineteen as Chapter Twenty and Nineteen of the NAFTA, respectively, and extended access to these mechanisms to Mexico. This book primarily focuses on the application of CVDs and the adverse international affects of governments subsidies practices, though many of the issues raised are also applicable to the application of AD duties and the private subsidization activities of firms. The book finds that, first; the Chapter Nineteen DSM may provide some short-term benefits to Canadian producers, but for ensuring the long-run stability of Canadian producers access to their U.S. markets, including the eradication of harassment by U.S. based producers using the ‘unfair’ trade laws, Canada still needs to push for major changes to the CVD and AD processes in the NAFTA mandated Working Groups. Second, if Chapter Eighteen, or now Twenty of the NAFTA, is going to best serve the interests of Canadian, American and Mexican citizens, then it is going to have to be seriously revised to take into account some type of consumer welfare criterion. As NAFTA is presently written it has a strong bias, carried over from the Canada-U.S. FTA, toward producer interests which may detract from the long run interests of consumers in the NAFTA area. The ability of groups who seek redress for the closing of markets in the NAFTA area by the three Parties to the Agreement is very weak at the present time.

Corporations and the Capture of Trade Policy -- Domesticating the GATT: The Design and Use of the U.S. and Canadian Trade Law Systems -- Discriminatory Practices in the U.S. and Canadian “Unfair” Trade Law Systems -- Resolving International Trade Disputes: The GATT Multilateral and the Canada-U.S. FTA Bilateral DSM Processes -- An Economic Evaluation of the DSMs in the Canada-U.S. FTA: Chapter Nineteen -- North American FTAs, Consumer Welfare, and the Resolution of General Trade Disputes -- An Examination of the 1994 GATT Subsidies Code Procedures -- Prioritizing an Agenda for Trade Dispute Settlement in North America

Dr. Andrew D.M. Anderson is a University Lecturer in the Department of Business and Management at City University of Hong Kong. Dr. Anderson received his Doctoral degree in Economics, magna cum laude, from Vrije Universiteit Brussel (University of Brussels) in 1991. He has a Masters Degree in Development Economics from Dalhousie University (1987), and a B.A. in Economics and Marketing from Memorial University of New foundland (1979). From 1988–1992 he was affiliated with the Ontario Centre for International Business, Research Programme, in the Faculty of Management, University of Toronto, where in his last year he was Associate Director of Research and Assistant Professor of International Business. Dr. Anderson has also been an economics and management consultant, as well as having worked for a number of years in banking. Dr. Anderson has published in a variety of journals, including Asia Pacific Journal of Management, Business Quarterly, Canada-U.S. Business Law Review, Canadian Journal of Administrative Sciences, Canadian Public Policy, International Trade Journal, Journal of International Arbitration, the Journal of World Trade, and Singapore Economic Review, as well as other journals. He is also coauthor of the book Administered Protection in America (with Alan Rugman) (1987). Dr. Anderson's work over the last few years has focused extensively on issues surrounding the Canada-U.S. Free Trade Agreement, particularly on the dispute settlement regimes of that Agreement. His latest research is examining the activities of Hong Kong-based MNEs as they undertake foreign direct investment (FDI), as well as reverse FDI by foreign-owned MNEs subsidiaries