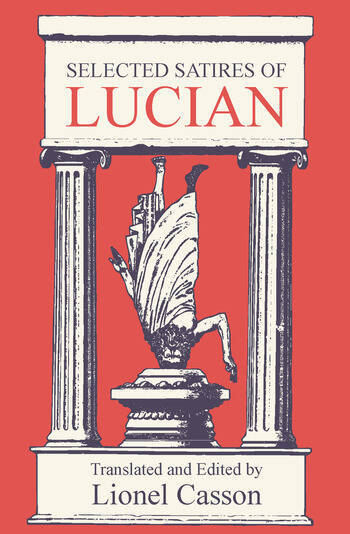 The unsurpassed satirist of the ancient era was a young Syrian named Lucian, who, writing in Greek in the second century a.d., combined wit, irony, fearless candor, and exuberant comic fantasy to create the triumphantly irreverent dialogues and stories contained in this book. His genial mockery, aimed at man's omnipresent feelings, has never gone out of date. The jabs he gave the hypocrites; grandstanders, fakers and boobs of the ancient world can just as appropriately be administered to their counterparts in the modern world.

Lucian's most typical genre is a parody of a Platonic dialogue, in which Zeus, Hermes, Eros, and other Olympians jabber in undivine harassment as some clever mortal (who very much resembles Lucian) is about to make scandalous fools of them. He also excelled at straight narrative, his two most famous tales being the elaborate science fiction spoof; "A True Story," and an old folk tale retold outrageously, "Lucius the Ass." His works were the product of an unrelentingly rational and skeptical mind, and have had an incalculable effect on writers and painters through the ages.

Until this volume, the English language reader of today to appreciate the importance and intelligence of Lucian. No volume of representative selections in translation is in print. There are satisfactory versions of the complete works, but the reader who takes this long will most likely lose a good deal of the sting of Lucian's needle. Lionel Cassen also illustrates the full range of Lucian's subject matter and various literary forms and when translating tried to focus on the Greek spirit as opposed to the literal meaning.