Sell Your Own Damn Movie! 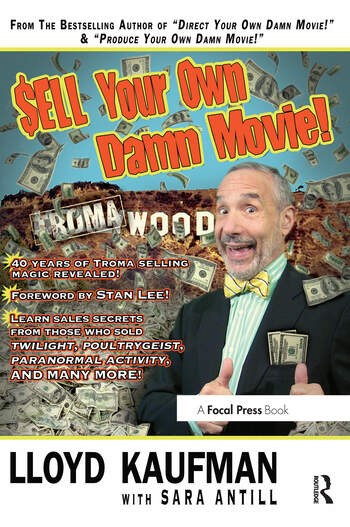 Sell Your Own Damn Movie!

This is the 3rd volume in Mr. Kaufman's hilarious, how-to series for hard-working self-starters and hard-laughing, cheeky filmmakers. "Sell Your Own Damn Movie!" covers everything you need to do to get your finished film seen by festival-goers, movie-goers, DVD-buyers and web-goers around the world. You will be lead through a primer on the history of film distribution to a discussion of the many ways you can get your film out there, either through a reputable distributor or all on your own. From the realities of distribution, to utilizing the internet to self-distribution, Mr. Kaufman tells you in his habitually lucid and off-the-wall way. Inserts include interviews and pointers from veteran distribution pros as well as directors and producers who share their own front-line stories. Mr. Kaufman recounts his own raucous stories of marketing pleasures and nightmares from 35 years of movie-making experience, creating a uniquely useful and entertaining read.

Or, in Lloyd's inimitable words.

The most asked question at my worldwide popular, legendary, renowned master class is, "How do I get my no-budget, zombie giraffe flick distributed? Well, have no  fear, because the 3rd volume in Uncle Lloydie's how-to series of go-to guides for filmmakers reveals the secrets, methods and tricks (short of prostituting yourself and selling bodily organs) to getting your film distributed. With Troma, our legendary 35-year-old independent studio, Michael Herz and I have developed a low cost, high-impact method for low-budget film distribution, which has lead to a high-profile brand name and a catalog of over 800 titles! Now you can learn to get you movie out there, too. I will be your busty tour guide, sharing with you my hard-earned cinematic distribution know-how!

-LEARN! How I achieved box office success with my fowl chicken zombie masterpiece Poultrygeist, and everyone's favorite super-human hero from New Jersey, the Toxic Avenger, for practically no money!

-MASTICATE! (No, not that kind of masticating) On the knowledge of DVD distribution as I es-chew the fat and get to the skinny of Do-It-Yourself DVD distribution. I will teach you the fundamentals of having a good website (like www.Troma.com) to boost your sales!

-FEAST! On my golden brown chicken puns as I cleverly cluck your brain out with the irrefutable knowledge of how I sold over 10,000 units of the 3-disc limited-edition Poultrygeist DVD in a matter of months!

YES! If you have any doubt that I will not be able turn your no-budget zombie giraffe opus into box-office gold, then put down this book proposal! No wait, pick it back up, pick it back up! This is a recession damnit, Troma needs all the money we can, er... I need to educate you filmmakers looking for distribution gold (brown)! After reading my book, any damn filmmaker will be able to "Sell Your Own Damn Movie!

Chapter 1 Understanding the Big Picture of Movie Distribution from 1974-Present
Chapter 2 Should You Have a Distributor for Your Movie? Am I Giving my Baby Away?
Chapter 3 Doing Distribution Yourself
Chapter 4 Tools for Distributing Your Own Damn Movie or How to Be Like Troma and Kick Ass without Breaking the Bank or Going to Jail
Chapter 5 Distributing Your Own Damn Movie Outside the US
Chapter 6 Utilizing Film Festivals When You Have Distribution or When You Don't
Chapter 7 How to Deal with Critics and Talk to the Press or How to Get Publicity Without Blowing Your Brains Out
Chapter 8 Promoting and Publicity, or How to Compete with $200 Million Dollar Burger King Promotions
Chapter 9 Distributing Your Film Via the Internet or Finding the Holy Grail of Riches on the Internet

Lloyd Kaufman is one of the very few genuine auteur filmmakers. He has written, produced, and/or directed more than 25 films, including "The Toxic Avenger", "Terror Firmer", "Tromeo and Juliet", and "Poultrygeist: Night of the Chicken Dead". Kaufman is president of the world-famous Troma Entertainment, the oldest and, arguably, the longest-running truly independent film studio in history. He is also the president of the IFTA (Independent Film & Television Alliance), whose members produce more than 400 independent films and countless hours of television programming each year and generate more than $4 billion in distribution revenues annually.

"While Kaufman fills his book with wacky anecdotes and reprints of goofy emails with his editor, there are occasional glimpses at the man behind the personality. Lloyd is a highly educated and very shrewd man who has spent the majority of his life fighting for the 'little guy'. As the chair for IFTA, he battles for net neutrality and equality to artists regardless of privilege. For as many small production companies that burst onto the scene only to disappear seemingly overnight, Troma has maintained a strong presence for almost forty years and shows little sign of disappearing any time soon."--HorrorTalk.com

"Some may know and love him best as the co-founder of Troma, Tromadance and the creator of The Toxic Avenger. Others may recognize him as the purveyor of breakthrough talent like the creators of "South Park," Trey Parker and Matt Stone. He's also known for authoring books that address that ins and outs of filmmaking such as "Make Your Own Damn Movie: Secrets of a Renegade Director." However best you know him there's no denying the influence Lloyd Kaufman has had on filmmakers and audiences for more than 40 years - and who better to let you know it than Lloyd Kaufman himself."--Cinespect.com

"Lloyd Kaufman is the man largely synonymous with Troma Entertainment, known for its creation and distribution of low-budget horror (and otherwise generally cheesy) flicks like Toxic Avenger and Poultrygeist. And he's damn proud of it. As he should be: Troma is responsible for giving Matt Stone and Trey Parker, Oliver Stone, and Billy Bob Thornton their movie debuts as actors and/or directors. Kaufman continues to extend a hand to the younger generation with a series of books about filmmaking, including his latest, Sell Your Own Damn Movie!."--AdultSwim.com

"Forget the studios and national distribution, Lloyd counsels; try for week long runs at small theaters. He provides some advice for promotion and also gives examples of money/ terms to expect i.e. get a deposit against a percentage of the gross. And, Don't forget to get everything in writing. He also explains how to lose $40,00 on $30,000 of ticket sales. That's the sort of information you probably don't find in every book."--NotesOnVideo.com

"Last night, Kaufman descended on NYC's famed Strand Book Store to a packed house of Troma fans, independent filmmakers, and wide-eyed onlookers. With the help of members of the Troma team, Kaufman proceeded to teach the audience how to effectively "sell our own damn movie." As a long time Troma fan, this was an exceptional opportunity to learn about all of Kaufman's successes and obstacles through the course of his legendary career."--LocalBozo.com

"In addition to Lloyd's warped sense of humor, and ability to digress, this book includes a lot of interviews and stories from people who - somehow - made a bit of a success of themselves. I think these stories can be summed up by: Every failure is the same, every success is unique."--NotesOnVideo.blogspot.com

"In a series to help aspiring filmmakers to realize their dreams and make the best of a financially challenged situation. This low budget film school continues with his latest,Sell Your Own Damn Movie!, which tells you what to do with your masterpiece once everything is shot and edited."--gordonandthewhale.com

"Covers everything you need to do to get your finished film seen by festival-goers, movie-goers, DVD-buyers and web-goers around the world. Inserts include interviews and pointers from veteran distribution pros as well as directors and producers who share their own front-line stories."--fearsmag.com

"This is purely a suggestion for the filmmakers out there. I find his own brand of film school books to be full of equal parts valuable information and hilarious insights into the life of the independent artist. Just finished Sell Your Own Damn Movie, and recommend the entire series to anyone seriously thinking about producing, directing, and everything else."--UnstableGround.com

"SELL YOUR OWN DAMN MOVIE covers everything you need to do to get your finished film seen around the world. Kaufman recounts his own frontline stories of how Troma Entertainment has successfully distributed movies for over 35 years, and devotes equal time to insightful interviews with distribution pros. You will learn formulas for success from the distributors of mainstream studio releases like TWILIGHT and PARANORMAL ACTIVITY, as well as from the distributors of "no-distribution budget" movies such as SITA SINGS THE BLUES and BOMB IT."--AmericaScreams.com

"Underground film making icon Lloyd Kaufman, the President of Troma Entertainment and Creator of 'The Toxic Avenger,' as well as  'Terror Firmer,' 'Tromeo and Juliet' and 'Poultrygeist: Night of the Chicken Dead,' will discuss his extremely humorous and informative new book, Sell Your Own Damn Movie. Sell Your Own Damn Movie! covers everything you need to do to get your finished film seen by festival-goers, movie-goers, DVD-buyers and web-goers around the world. Inserts include interviews and pointers from veteran distribution pros as well as directors and producers who share their own front-line stories."--FPUSADailyPlanet.com

"While his sense of humor may not be everyone's cup of tea, one cannot discount the breadth of knowledge he brings to the table when it comes to making a career in independent cinema. Each one of his books have been inspiring and informative, but equally realistic and sobering, with this volume proving to be the most eye-opening of all. In his previous books, we met the passionate, eccentric filmmaker side of Lloyd Kaufman, but, in Sell Your Own Damn Movie, we get to see the shrewd businessman that he truly is. You'll read chapters of this book and shake your head in amazement at just how much this tenacious little fella's been able to accomplish for all of these years without so much as a single suit looking over his shoulder (at least not one that he didn't hire to keep him reeled in). Like all of the books in the "Damn" series, Sell Your Own Damn Movie should be considered essential reading for anyone considering a career in film, especially those who are making/have made a movie they intend to shop around outside the mainstream. This book is chock full of sound advice delivered in an easily digestible, humorous, and, most importantly, practical-yet-realistic fashion. Very highly recommended."--Horrorview.com