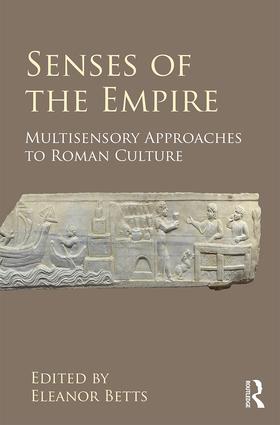 Senses of the Empire

The Roman empire afforded a kaleidoscope of sensations. Through a series of multisensory case studies centred on people, places, buildings and artefacts, and on specific aspects of human behaviour, this volume develops ground-breaking methods and approaches for sensory studies in Roman archaeology and ancient history. Authors explore questions such as: what it felt like, and symbolised, to be showered with saffron at the amphitheatre; why the shape of a dancer’s body made him immediately recognisable as a social outcast; how the dramatic gestures, loud noises and unforgettable smells of a funeral would have different meanings for members of the family and for bystanders; and why feeling the weight of a signet ring on his finger contributed to a man’s sense of identity. A multisensory approach is taken throughout, with each chapter exploring at least two of the senses of sight, hearing, smell, taste and touch. The contributors’ individual approaches vary, reflecting the possibilities and the wide application of sensory studies to the ancient world. Underlying all chapters is a conviction that taking a multisensory approach enriches our understanding of the Roman empire, but also an awareness of the methodological problems encountered when reconstructing past experiences.

"…a stimulating contribution to a still relatively new question in the study of ancient life worlds, which has great potential for knowledge." - Ursula Quatember, Bryn Mawr Classical Review 2017

"This volume explicitly sets out to spark a debate about sensory studies and antiquity … papers on different senses are deliberately interwoven rather than separated into sections on taste, touch, smell, etc … Perhaps the best feature of the book is its encouragement to experiment with sensory methods and its positioning of itself as the beginning of a conversation rather than a definitive statement." - Britta Auger, The Classical Journal 2018

"Senses of the Empire is undoubtedly destined to become an essential work of reference in the new trend of Sense Studies in Ancient History." - Antón Alvar Nuño, The Journal of Roman Studies

"…a high-quality, lively and inventive collection of essays, which will do much to stimulate further study in this field… In this excellent collection, we can see many of the ways in which the senses served as the conduit through which the exercise of power could flow, and overall it succeeds in taking the study of the senses in antiquity to a new level of theoretical insight and detailed investigation." - Jerry Toner, The Classical Review

Chapter 1 The Sounds of the City: from Noise to Silence in Ancient Rome

Chapter 3 Beyond Smell: the Sensory Landscape of the Roman fullonica

Chapter 4 Soundscape of the Street: Architectural Acoustics in Ostia

Chapter 6 A Sense of Grief: the Role of the Senses in the Performance of Roman Mourning

Chapter 7 Blood, Fire and Feasting: The Role of Touch and Taste in Graeco-Roman Animal Sacrifice

Chapter 8 Babes in Arms? Sensory Dissonance and the Ambiguities of Votive Objects

Chapter 9 All That Glitters: Roman Signet Rings, the Senses and the Self

Chapter 10 Tuning into the Past: Methodological Perspectives in the Contextualised Study of the Sounds of Roman Antiquity

Chapter 12 Scents of Place and Colours of Smell: Fragranced Entertainment in Ancient Rome

Afterword: Towards a Methodology for Roman Sensory Studies

Eleanor Betts is Baron Thyssen Lecturer in Classical Studies at the Open University. Her research focuses on the multisensory interrelationships of the human body, material culture and archaeological landscapes. Her particular areas of interest are Roman urbanism and religion in Roman and Iron Age Italy (primarily Picenum, modern Marche), with an emphasis on concepts and use of space.