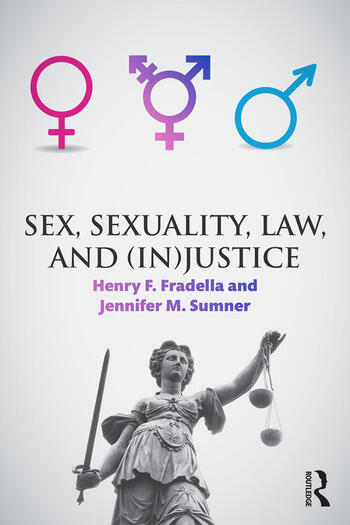 Sex, Sexuality, Law, and (In)Justice covers a wide range of legal issues associated with sexuality, gender, reproduction, and identity. These are critical and sensitive issues that law enforcement and other criminal justice professionals need to understand. The book synthesizes the literature across a wide breadth of perspectives, exposing students to law, psychology, criminal justice, sociology, philosophy, history, and, where relevant, biology, to critically examine the social control of sex, gender, and sexuality across history.  Specific federal and state case law and statutes are integrated throughout the book, but the text moves beyond the intersection between law and sexuality to focus just as much on social science as it does on law.  This book will be useful in teaching courses in a range of disciplines—especially criminology and criminal justice, history, political science, sociology, women and gender studies, and law.

1: An Overview of Sex, Gender, and Sexuality by Patrick Englert and Elizabeth G. Dinkins 2: Historical Perspective by Ann Marie Nicolosi 3: Sex and the Fourteenth Amendment Part I: Due Process of Law by Stephen S. Owen and Tod W. Burke 4: Sex and the Fourteenth Amendment Part II: Equal Protection of the Law by Stephen S. Owen and Tod W. Burke 5: Rape and Related Offenses by Henry F. Fradella and Chantal Fahmy 6: The Criminal Regulation of Sex: The Limits of Morality and Consent by Henry F. Fradella and Kenneth Grundy 7: The Regulation of Sex Work and Sex Workers by Elisabeth Jandro 8: Obscenity and Pornography by Weston Morrow, Chantal Fahmy, and Henry F. Fradella 9: Marriage, Sexuality, and Gender by Henry F. Fradella, Megan Parry, and Lauren E. Fradella 10: Rare Acts, Sympathetic Victims, and the Emergence of Laws to Regulate Sex Offenders by David Patrick Connor 11: Sex in Jails and Prisons by James E. Robertson 12: Sex Offenders and their Treatment by Thomas Nolan and Mary Maguire 13: Sex, Gender, Sexuality, and Victimology by Jayn von Delden

Henry F. Fradella earned a law degree from The George Washington University, and a Ph.D. in interdisciplinary justice studies from Arizona State University. Dr. Fradella uses transdisciplinary theories and methods to examine the law’s effects on human behavior and, conversely, how the social human condition affects the behavior of law. In particular, he specializes in the intersection of law with the social and forensic sciences, most frequently with emphases in either forensic psychology and psychiatry, or human sexuality. This includes research and teaching on the historical development of criminal and constitutional law (substantively, procedurally, and evidentially); the dynamics of legal decision-making (including the roles of politics, discretion, morality, and popular culture); and the nature, sources, and consequences of variations in legal institutions or processes (including law and social change). In 2017 he was awarded the Richard Tewksbury Award for significant contributions to scholarship or activism on the intersection of crime and sexuality by the Western Society of Criminology.

Jennifer M. Sumner is an Assistant Professor of Criminal Justice Administration in the Department of Public Administration at California State University, Dominguez Hills (CSUDH). She completed her doctorate in Criminology, Law, and Society at the University of California, Irvine. Dr. Sumner’s research examines how the criminal justice system constructs and deploys gendered and sexualized categories in its policies and practices, and how these processes affect different groups. This has included a focus on the experiences and treatment of transgender populations in the criminal justice system, including policies and practices developed to address the management and care of transgender prisoners. More recently, this work has extended beyond correctional settings to focus on exclusion and inclusion of transgender as well as law enforcement professionals in the workplace, funded by the Palm Center. Her work has also been funded by the National Science Foundation to examine correctional policy in international settings.