Sexualised Crimes, Armed Conflict and the Law
The International Criminal Court and the Definitions of Rape and Forced Marriage 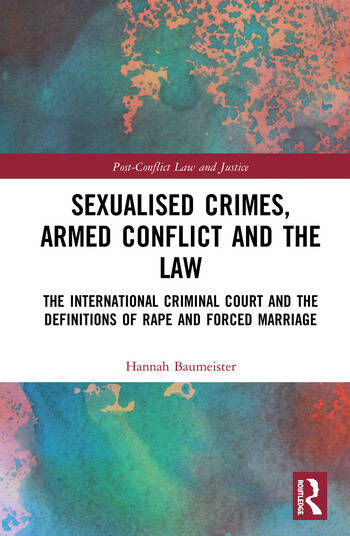 Sexualised Crimes, Armed Conflict and the Law: The International Criminal Court and the Definitions of Rape and Forced Marriage

From ancient to modern times, sexualised war violence against women was tolerated if not encouraged as a means of reward, propaganda, humiliation, and terror. This was and is in defiance of international laws that have criminalised acts of sexualised war violence since the 18th century. Ad hoc international tribunals have addressed especially war rape since the 15th century. The International Criminal Court (ICC), however, is the first independent, permanent, international criminal court that recognises not only war rape but also sexual slavery and other sexualised crimes as crimes against humanity, war crimes, and acts of genocide in its statute and supporting documents.

Sexualised Crimes, Armed Conflict and the Law draws on feminist and constructivist theories and offers a comprehensive theoretical and empirical examination of the definition of rape and forced marriage. It presents the latest state of knowledge on the topic and will be of interest to researchers, academics, policymakers, officials and intergovernmental organisations, and students in the fields of post-conflict law and justice, international law, human rights law, international relations, gender studies, politics, and criminology.

3. Theories and Legislative Histories of War Wape and Forced Marriage

4. The Dynamics of the ICC Negotiations: Actors’ Identities, Influences and Methods

5. The ICC Negotiations of War Rape and Forced Marriage

Hannah Baumeister is a Lecturer in Law at Middlesex University Mauritius.