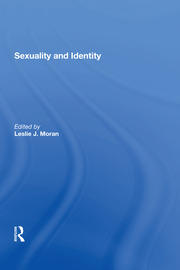 Born in the late nineteenth century, sexuality is a relatively new category within the human sciences in general and law and society scholarship in particular. Despite its novelty, it is now a central category through which we understand ourselves both as individuals and as members of communities. This volume offers a collection of essays selected to reflect the ever-widening horizons and diverse methodologies of law and society scholarship on sexual and identity in law. The essays offer an insight into some of the key themes and recent developments in this body of work. Each in different ways offers an evaluation of the nature, meaning and effects of sexuality thereby providing a critical evaluation of the politics of sexual identity as it appears in and through the law.