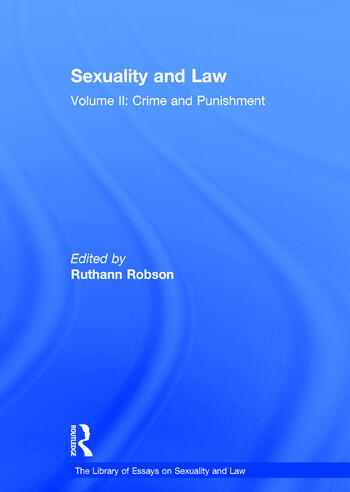 The continued criminalization of same-sex sexual acts, variously labeled sodomy, buggery, or the crime against nature, is inconsistent throughout the world. The criminalization of other sexual acts, such as public sex, commercial sex, or HIV-transmission, is more common. The relationship between sexuality and criminality is not limited to a direct criminalization of sexual acts, however. The victimization of sexual minorities because of their sexuality has garnered attention in the conceptualization of hate crimes in many countries. When sexual minorities are accused of victimizing others, the criminal justice system can conflate sexual identity with the criminal acts resulting in biased convictions. Imprisonment and punishment norms can pose special problems in the context of gender minorities or for sex offenses. The papers reprinted in this volume cover doctrinal, theoretical and political analysis of the current and historical criminalization of a wide variety of sexual acts, including ones less commonly discussed. It also includes discussions of the 'homosexual panic' defense, hate crimes and domestic violence, as well as examinations of specific cases in which the sexuality of the accused became pertinent. The volume also includes discussions of the imprisonment of gender nonconforming persons in systems of sex-segregated prisons and the treatment of 'sex offenders'.

Ruthann Robson is Professor of Law and University Distinguished Professor at the City University of New York School of Law, where she has taught in the areas of Constitutional Law and Sexuality and Law since 1990. She is the author of several books about sexuality and legal theory, including Lesbian (Out)Law and Sappho Goes to Law School, as well numerous articles published in the United States, UK, Canada, New Zealand, Australia, and South Africa. She frequently speaks about sexuality issues throughout the world.