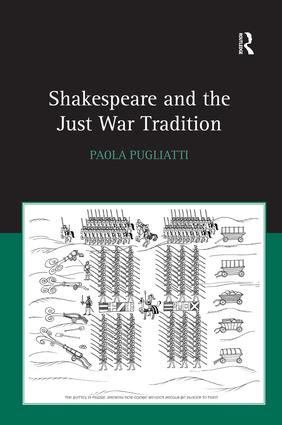 Shakespeare and the Just War Tradition

Brought to light in this study is a connection between the treatment of war in Shakespeare's plays and the issue of the 'just war', which loomed large both in religious and in lay treatises of Shakespeare's time. The book re-reads Shakespeare's representations of war in light of both the changing historical and political contexts in which they were produced and of Shakespeare's possible connection with the culture and ideology of the European just war tradition. But to discuss Shakespeare's representations of war means, for Pugliatti, not simply to examine his work from a literary point of view or to historicize those representations in connection with the discourses (and the practice) of war which were produced in his time; it also means to consider or re-consider present-day debates for or against war and the kind of war ideology which is trying to assert itself in our time in light of the tradition which shaped those discourses and representations and which still substantiates our 'moral' view of war.

'As an "innocent", which is to say non-specialist, reader of Shakespeare, I knew that one could find everything in his work, as in the Bible; what I had not imagined was that the Bard - what a devil of a man! - could also inspire one to reflect on a subject that so closely presses upon us today: the ethics of war. Paola Pugliatti's book, however, has obliged me to re-read him from this entirely new perspective.' Umberto Eco 'Thinking and writing on the idea of just war, its meaning, and its use erupted into high flower in England during the end of the sixteenth century and the first part of the seventeenth, responding to the Continental religious wars, the ongoing hostile relations between England and Spain, and the increasing emergence of England as a global power and power broker. Those who contributed to this phenomenon included political and military figures, theologians, lawyers, and not least, playwrights, including Marlowe and especially Shakespeare, who publicized and interpreted the just war idea for the non-intellectual public. In Shakespeare, Paola Pugliatti writes, "war is ubiquitous". Her examination of his use of war and of just war tradition in his work places it in the context of the prior development of this tradition during the late Middle Ages and the burgeoning debates about just war in Shakespeare’s own time. Not only does her study add depth to understanding Shakespeare on war; it provides a primer on the development of the tradition of just war out of which the English debates of this period grew. Pugliatti’s work is an important new addition to reflection on both Shakespeare and just war tradition.' James Turner Johnson, Rutgers University, USA, and author of many books on just war tradition and its use 'Henry V, ever Shakespeare's classic "war play", provides Pugliatti with an interesting case study in the unending ambivalence of "just". …[a] fascinating study.' Times Literary Supplement 'Shakespeare and the Just War Tradition p

Paola Pugliatti has been Professor of English Literature at the University of Florence and has also taught at the Universities of Messina, Bologna and Pisa. She has written extensively on Shakespeare and on the European Renaissance; she is also the author of Beggary and Theatre in Early Modern England (Ashgate, 2003). Other fields of interest are the novel and textual genetics, with particular attention to the case of James Joyce's Ulysses