Shakespearean Genealogies of Power
A Whispering of Nothing in Hamlet, Richard II, Julius Caesar, Macbeth, The Merchant of Venice, and The Winter’s Tale 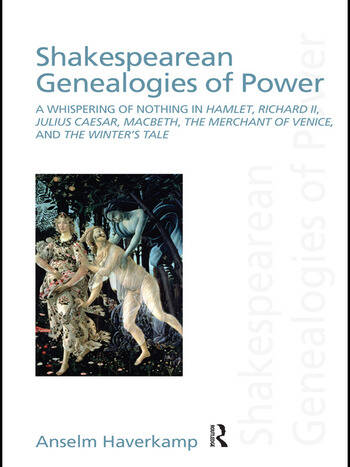 Shakespearean Genealogies of Power: A Whispering of Nothing in Hamlet, Richard II, Julius Caesar, Macbeth, The Merchant of Venice, and The Winter’s Tale

Shakespearean Genealogies of Power proposes a new view on Shakespeare’s involvement with the legal sphere: as a visible space between the spheres of politics and law and well able to negotiate legal and political, even constitutional concerns, Shakespeare’s theatre opened up a new perspective on normativity. His plays reflect, even create, "history" in a new sense on the premises of the older conceptions of historical and legal exemplarity: examples, cases, and instances are to be reflected rather than treated as straightforwardly didactic or salvific. Thus, what comes to be recognized, reflected and acknowledged has a disowning, alienating effect, whose enduring aftermath rather than its theatrical immediacy counts and remains effective. In Shakespeare, the law gets hold of its normativity as the problematic efficacy of unsolved – or rarely ever completely solved – problems: on the stage of the theatre, the law has to cope with a mortgage of history rather than with its own success story. The exemplary interplay of critical cultural and legal theory in the twentieth-century – between Carl Schmitt and Hans Kelsen, Walter Benjamin and Ernst Kantorowicz, Hans Blumenberg and Giorgio Agamben, Robert Cover and Niklas Luhmann – found in Shakespeare’s plays its speculative instruments.

1. Perpetuum Mobile: Shakespeare’s Perpetual Renaissance  2. The Ghost of History: Hamlet’s Politics of Paternity  3. Lethe’s Wharf: Wild Justice, the Purgatorial Supplement  4. Richard II, Bracton, and the End of Political Theology  5. The Death of a Shifter: Jupiterian History in Julius Caesar  6. The Future of Violence: Macbeth and Machiavelli  7. The Whispering of Nothing: The Winter’s Tale  8. But Mercy is Above: Shylock’s Pun of a Pound  9. Habeas Corpus: The Law’s Desire to Have the Body

Anselm Haverkamp is Professor of English at New York University. He is also a Professor of Literature and Philosophy in Berlin and Munich, and has held visiting appointments at Yale University, the EHESS in Paris, and the Cardozo Law School in New York.

Brilliant, intense, and original. Like Benjamin, whose book on German baroque drama is comparably difficult, Haverkamp rewards every bit of concentration and labor. Just when it seemed impossible to write about Hamlet in a fresh and exciting way, Haverkamp comes along and shows how it can be done. His work will have a serious impact on anyone interested in the application of theory to Shakespeare.

Anselm Haverkamp writes in, but also to, the European Shakespeare tradition, a stage shared by Hegel, Freud and Benjamin as well as Beckett, Brecht and Müller His readings pursue the emergence and mutation of Shakespeare’s futures in response to the refiguring pressures of theatrical performance, philosophical engagement, avant-garde adaptation, and epochal catastrophe. This study of Shakespeare’s ongoing effects is the most stunning account to date of what it means for Shakespeare to be our contemporary – and why we should care.

Armed with the double-edged saber of historical erudition and textual acumen, Anselm Haverkamp storms the Fortresses Elsinore, and Dunsany, but also most of the idées reçues of contemporary Shakespeare criticism, and in the process challenges readers to radically rethink and reread what they thought they knew – not just concerning Hamlet, Macbeth and Richard II, but about power, violence, theater and literature in the modern world.