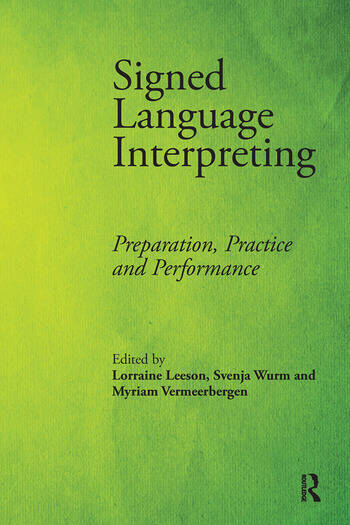 Signed language interpreting continues to evolve as a field of research. Stages of professionalization, opportunities for education and the availability of research vary tremendously among different parts of the world. Overall there is continuing hunger for empirically founded, theoretically sound accounts of signed language interpreting to inform practice, pedagogy and the development of the profession.

This volume provides new insights into current aspects of preparation, practice and performance of signed language interpreting, drawing together contributions from three continents. Contributors single out specific aspects of relevance to the signed language interpreting profession. These include preparation of interpreters through training, crucial for the development of the profession, with emphasis on sound educational programmes that cover the needs of service users and the wide-ranging skills expected from practitioners. Resources, such as terminology databases, are vital tools for interpreters to prepare successfully for events. Practice oriented, empirical investigations of strategies of interpreters are paramount not only to increase theoretical understanding of interpreter performance, but to provide reference points for practitioners and students. Alongside tackling linguistic and pragmatic challenges, interpreters also face the challenge of dealing with broader issues, such as handling occupational stress, an aspect which has so far received little attention in the field. At the same time, fine-grained assessment mechanisms ensure the sustainability of quality of performance. These and other issues are covered by the eighteen contributors to this volume, ensuring that the collection will be essential reading for academics, students and practitioners.

Hey Presto! Preparation, Practice and Performance in the World of Signed Language Interpreting and Translating

This paper introduces the volume by reflecting on the current state of research and training in the field of signed language interpreting and translating. While the discipline has been successful in maintaining a relevant relationship with the practice and profession, noticeable, for example, in the growing number of practisearchers and a traditional focus on vocationally-oriented training, there is still a need for producing rigorous empirical and theory driven research more consistently. Outlining the importance of adequate, research-informed training of interpreters, the authors argue that research should produce outcomes that (1) feed directly into teaching by describing the skills and strategies that interpreters need to develop, (2) provide technical tools to be used by interpreters or trainees, and/or (3) expand our understanding of interpreting practices, the role of the interpreter and the interpreting context. Setting the scene for the subsequent papers of the volume, this introductory chapter thus argues for a sustainable research basis that will eventually close the research-training-practice cycle.

Becoming the Ears, Eyes, Voice and Hands of Someone Else: Educating Generalist Interpreters in a Three-year Programme

This paper provides a brief introduction to various aspects of the educational model used in the interpreter education programme in Trondheim, Norway. The choice and development of the model is based on the need to integrate several different forms of communication used by three groups – deaf, deafened, and deafblind people – in a three-year bachelor programme. In answer to this challenge, the educational team chose to combine and further develop a socio-cultural model of language and communication with cognitive linguistic theories. The advantage of this model is that the basic understanding of communication and the analytic strategies used in the model are independent of the particular communication form and can thus be used as tools for the interpreter student’s training for all of the communication forms they need to acquire. Furthermore, the approach to each communication form needs to be consistent with the programme’s perspective on the interpreter’s role and function in the profession. Thus the programme has been designed as a holistic approach, where the various aspects of interpreting between different communication forms are understood through the same socio-cultural communication model. In this paper, the key concepts of this educational model will be presented and the advantages and challenges will be discussed.

The Prolibras Test as an Assessment of Brazilian Sign Language Interpreters Proficiency: A Critique

This paper focuses on the issue of testing language or translating and interpreting proficiency among Brazilian Sign Language interpreters, and specifically on the recently introduced Prolibras test, which is a standardized tool of assessment. The main purpose is to explore whether a single test of translation and interpreting proficiency is valid for both Brazilian Sign Language interpreters and teachers of Brazilian Sign Language (Libras). The authors also ask whether there is consistency (both theoretical and in practical terms) between the proficiencies assessed and their effective application. A number of features of Prolibras are analyzed and compared to the Sign Language Proficiency Interview, SLPI, (Caccamise and Newell 2007, 2011) applied in the United States, a typical language proficiency assessment. The results provide evidence that the Prolibras professional certification process demonstrates some features of a language test, but for several reasons (which are outlined in the article) it should not be considered a valid assessment of interpreting proficiency.

Types of Errors in the Learning of Spanish Sign Language as a Second Language: The Effect of Age and Experience

Previous studies have shown that people who learn a signed language earlier in life make fewer errors when trying to understand a signed message than people who are exposed to a signed language later. Typically, native signer errors are most frequently semantic in nature, while late signer errors tend to be phonological in nature. Semantic errors positively correlate with recall of a signed message, while phonological errors have a negative correlation. With a sample of 35 hearing persons who have a good command of Spanish Sign Language, this study sets out to explore whether hearing late signers behave similarly to deafened adults who learn a signed language as an L2 with respect to the type of errors they make during comprehension tasks. The paper also examines whether comprehension correlates with specific errors for hearing late learners of a signed language and if length of time using a signed language has any effect.

Being There: Role Shift in English to Auslan Interpreting

This paper investigates the use of ‘role shift’ by interpreters working from spoken English into Australian Sign Language (Auslan). Role shift is a high-order linguistic skill which students typically find difficult to master. The study looks at possible source text (ST) motivations for its use by four skilled signed language interpreters in an English to Auslan interpreting task, with a view to later pedagogical application. Auslan target texts (TT) rendered by the interpreters were mapped against the English ST using ELAN annotation software. Salient features of the role shift generated by the participants are documented, including: incidence of role shift, native/non-native signer advantage, persona adopted, constructed action versus constructed dialogue, and length and intensity of role shift. Examination of ST segments which trigger role shift in the TT reveals that agent-focused active clause constructions in particular require little manipulation and most readily lead to role shift outcomes. Passive constructions, nominalizations and complex/higher register segments, however, are frequently re-structured into simpler active clauses, with role shift incorporated (or not). The data does not support a strict cause-effect relationship between any particular ST feature and the production of role shift in the TTs; rather, it points to the need for interpreters to recognize ready opportunities for inclusion of role shift, and/or to reconfigure the ST content and form, with role shift as a further layer of depiction.

This paper investigates the (im)politeness strategies employed by the candidates for the office of Prime Minister in a media political debate in Greece and their rendering in Greek Sign Language by the signed language interpreter. Drawing on the concept of face (Goffman 1967) and politeness theory (Brown and Levinson 1987), the study explores the interpreter’s strategies of omission, addition, substitution and paraphrasing (Leeson 2005) and how they potentially influence the target text and hence the deaf viewers’ perception of the two candidates. Based on a small corpus (30 minutes of the 90-minute debate) the author provides preliminary qualitative evidence that the candidates’ (im)politeness strategies can be undermined when mediated through an interpreter. The findings of the study suggest the need for raising interpreters’ awareness of (im)politeness strategies and how these are used by both hearing and deaf participants in an interaction with the aim of preserving face.

Medical Signbank: A Cure-all for the Aches and Pains of Medical Signed Language Interpreting?

Language, cultural and educational impediments in the effective use of signed language interpreters in medical and mental health service delivery have been identified by Australian researchers (Cornes and Napier 2005; Napier and Johnston 2005), but until 2008 no linguistic research had been carried out in Australia on signed language interpreter-mediated medical encounters. This paper described an Australian project that involves the development of an innovative web-based interactive multimedia dictionary and database of Auslan. It was designed to create an effective, accepted and shared signed language vocabulary for the discussion of medical and mental health issues by deaf clients and health professionals, mediated through Auslan interpreters. The conceptual framework was language planning and development within a small linguistic community of ‘limited diffusion’. The technology enables the direct participation of interpreters, deaf people and medical practitioners in a project managed by linguists, signed language interpreters, and language service providers (the National Auslan Interpreter Booking and Payment Service, and the New South Wales Health Care Interpreting Service). The paper outlines the progress of the project, and specifically reports on findings from surveys and discussions conducted with interpreters about the strategies they use to deal with medical terms that have no Auslan equivalents, and their thoughts on challenges in medical interpreting.

A Magical Profession? Causes and Management of Occupational Stress in the Signed Language Interpreting Profession