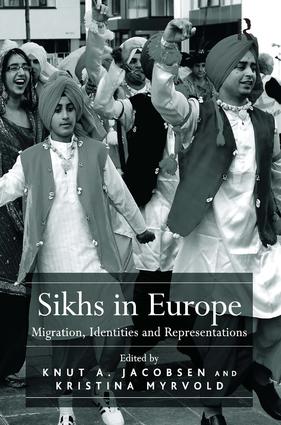 Edited by Knut A. Jacobsen

Sikhs in Europe are neglected in the study of religions and migrant groups: previous studies have focused on the history, culture and religious practices of Sikhs in North America and the UK, but few have focused on Sikhs in continental Europe. This book fills this gap, presenting new data and analyses of Sikhs in eleven European countries; examining the broader European presence of Sikhs in new and old host countries. Focusing on patterns of migration, transmission of traditions, identity construction and cultural representations from the perspective of local Sikh communities, this book explores important patterns of settlement, institution building and cultural transmission among European Sikhs.

'…The editors deserve praise for bringing together this set of well-researched papers in a single volume. The book fills a major gap in the knowledge about Sikh communities in several European countries, and is a major contribution to the study of international migration, religion, and multiculturalism… Highly recommended…' Choice '… a volume of interest not only to scholars of migration, religion and South Asia, but also to European Sikhs - who to my experience have a keen interest in their own history and heritage… this volume is exciting and bodes well for the next outputs of the Sikhs in Europe network, such as Sikhs Across Borders (Jacobsen and Myrvold 2012), and an anticipated focus of future work on inter-generational change and European Sikh youth.' Nordic Journal of Migration Research ’Unlike the larger UK Sikh community, which has been well studied since the 1960s, this is the first comprehensive account of the growing Sikh presence in continental Europe. On this criterion alone it is a landmark publication. […]By bringing out this refreshing and timely publication on Sikh communities in Europe, which hitherto had been largely invisible, little known and understood despite their unsurpassed contribution during WW1 and WW2, the editors have done a great service to both the fields of Diaspora Studies and Sikh Studies.’ Punjab Studies