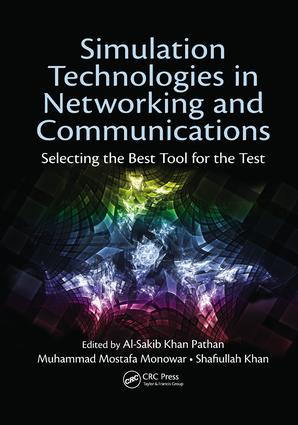 Simulation Technologies in Networking and Communications

Selecting the Best Tool for the Test, 1st Edition

Simulation is a widely used mechanism for validating the theoretical models of networking and communication systems. Although the claims made based on simulations are considered to be reliable, how reliable they really are is best determined with real-world implementation trials.

The book compiles expert perspectives about the simulation of various networking and communications technologies. These experts review and evaluate popular simulation modeling tools and recommend the best tools for your specific tests. They also explain how to determine when theoretical modeling would be preferred over simulation.

This book does not provide a verdict on the best suitable tool for simulation. Instead, it supplies authoritative analyses of the different kinds of networks and systems. Presenting best practices and insights from global experts, the book provides you with an understanding of what to simulate, where to simulate, whether to simulate or not, when to simulate, and how to simulate for a wide range of issues.

Analysis and Simulation of Computer Networks with Unlimited Buffers; Lev B. Levitin and Yelena Rykalova

How to Simulate and Evaluate Multicast Routing Algorithms; Maciej Piechowiak and Piotr Zwierzykowski

Simulation Tools for the Evaluation of Radio Interface Technologies for IMT-Advanced and Beyond; Krzysztof Bąkowski, Krzysztof Wesołowski, and Marcin Rodziewicz

Performance Evaluation of Flooding Algorithms for Wireless Sensor Networks Based on EffiSen: The Custom-Made Simulator; Bartosz Musznicki and Piotr Zwierzykowski

Simulation of Communications and Networking in Vehicular Ad Hoc Networks; Jorge I. Blanco and Houbing Song

engineering department in BRAC University, Bangladesh. Prior to holding this position, he worked as a researcher at the Networking Lab, Kyung Hee University, South Korea, until August 2009. His research interests include wireless sensor networks, network security, and e-services technologies. He is a recipient of several awards, including best paper awards, and has several publications in these areas. He has served as a chair, organizing committee member, and technical program committee member in numerous international conferences/workshops such as GLOBECOM, GreenCom, HPCS, ICA3PP, IWCMC, VTC, HPCC, and IDCS. He was awarded the IEEE Outstanding Leadership Award and Certificate of Appreciation for his role in the IEEE GreenCom’13 conference.

Dr. Pathan is currently an area editor of IJCNIS; editor of IJCSE, Inderscience; associate editor of IASTED/ACTA Press IJCA and CCS; guest editor of many special issues of top-ranked journals, and editor/author of ten books. One of his books has been included twice in Intel Corporation’s Recommended Reading List for Developers, second half of 2013 and first half of 2014. Three other books are included in IEEE Communications Society’s (IEEE ComSoc) Best Readings in Communications and Information Systems Security, 2013, and a fifth book is in the process of being translated from English to simplified Chinese. Also, two of his journal papers and one conference paper are included under different categories in IEEE Communications Society’s (IEEE ComSoc) Best Readings Topics on Communications and Information Systems Security, 2013. He also serves as a referee of numerous renowned journals. He is a senior member of the Institute of Electrical and Electronics Engineers (IEEE), United States; IEEE ComSoc Bangladesh Chapter; and several other international professional organizations.

Muhammad Mostafa Monowaris currently working as an assistant professor in the Department of Information Technology at King Abdulaziz University, Kingdom of Saudi Arabia. He also served as an associate professor in the Department of Computer Science and Engineering at the University of Chittagong, Bangladesh, until February 2012. He earned his PhD in computer engineering in 2011 from Kyung Hee University, South Korea. He earned his BSc in computer science and information technology from the Islamic University of Technology (IUT), Bangladesh, in 2003. His research interests include wireless networks, especially ad hoc, sensor, and mesh networks; routing protocols; MAC mechanisms; IP and transport layer issues; cross-layer design; and Quality of Service (QoS) provisioning.

He served as a guest editor of some special issues of IJCSE and is currently associate editor of IJIDS. He has also served as an editor of a book published by CRC Press, Taylor & Francis Group, United States. He has served as a program vice chair of IEEE HPCC 2013, and also program committee member in several international conferences/workshops such as IEEE IDCS, DNC, ICCCS, and CNTA. He is also a referee of several renowned journals, such as Annals of Telecommunications and Journal of Communications and Networks.

Shafiullah Khanis currently assistant professor at the Institute of Information Technology, Kohat University of Science and Technology (KUST), Islamic Republic of Pakistan. He earned his PhD in communication networks in 2011 from Middlesex University, United Kingdom. He earned his BIT in information technology from Gomal University, Islamic Republic of Pakistan, in 2005. His research interest includes wireless networks and wireless network security. He served as a guest editor of many special issues and is currently an editor-in-chief of IJCNIS. He has also served as an editor of several recently published books.