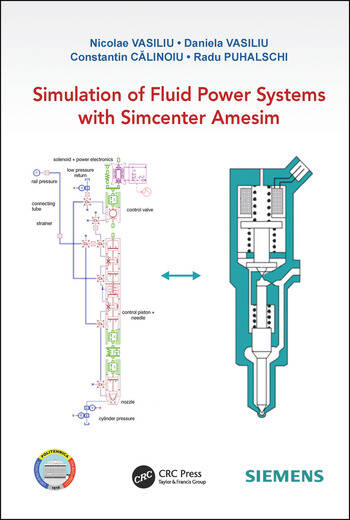 Nicolae Vasiliu (born in 1946) graduated in Hydropower Engineering from University POLITEHNICA of Bucharest in 1969. He became Ph.D. in Fluid Mechanics after a research stage in Grand State University and Von Karman Institute from Bruxelles. He became state professor in 1994, leading the Fluid Control Laboratory from U.P.B. He worked always for the industry, as project manager or scientific advisor. In 1980, he joined the Hydraulic Control Team from the Romanian Aerospace Institute. He is working mainly in modeling, simulation, dynamic identification, remote control, and virtual instrumentation of the electro hydraulic control systems. Some highlights of his career include: manager, from 1996, of the ENERGY & ENVIRONMENT RESEARCH CENTRE from U.P.B.; Director of the ROMANIAN INNOVATION FINANCING AGENCY (2006-201). In the FLUID POWER NET, Prof. Vasiliu currently serves as Romanian Chairman. He has received many awards for achievements in education and leadership. Some of his patents gained international awards in Geneva, Bruxelles, Moscow and Warsaw, and were successfully applied. He is a member of the ROMANIAN TECHNICAL SCIENCES ACADEMY from 2012.

(born in 1958) graduated in 1981 in Mechanical Engineering, Hydraulic & Pneumatic Machines from University POLITEHNICA of Bucharest. She became a Ph.D. in Fluid Power Systems in 1997, after a long series of research stages in INSA TOULOUSE, IMAGINE FRANCE, LMS BELGIUM, and FESTO AUSTRIA. After graduation and a stage in the Hydraulic Machinery Laboratory of the PLOPENI MECHANICAL COMPANY, she worked as research engineer in the POWER EQUIPMENT RESEARCH INSTITUTE, Electro Hydraulic Speed Governor Laboratory. In 1985, she joined as researcher the Hydraulics and Hydraulic Machinery Chair and the Automotive Chair from U.P.B. In 1990, she became lecturer in the same chair. Full professor from 2001, she developed the CAD/CAE laboratory directed to the modeling, simulation and experimental identification of the electro hydraulic servo pumps, servomotors and automotive servomechanisms with high level software like AMESIM and LabVIEW. She developed the research platforms e-AHP and ENERGY & ENVIRONMENT SCADA, with LMS INTL, ANSYS, PTC, ESRI, NI and other top-level engineering companies. Prof. Vasiliu D. is the director of the FLUID POWER LABORATORY from U.P.B., member of FLUID POWER NET, ASME, EUROSIS, SIA, SIAR, AGIR, and FLUIDAS.

graduated in Power Engineering from University POLITEHNICA of Bucharest in 1975, and in Mathematics at the Bucharest University in 1981. After his studies, he became scientific researcher in the Hydraulics Laboratory of the Romanian Aerospace Institute. In 1998, he defended his PhD thesis, and became associated professor in the Fluid Power Laboratory from U.P.B. He is working mainly in modeling, simulation, and identification of the hydraulic and electrohydraulic control systems.

graduated in Applied Computer Science from University POLITEHNICA of Bucharest in 2009, and then a Master in Advanced Hydraulic and Pneumatic Systems in 2011. After a stage of web designer at HP Germany, he elaborated a PhD thesis on Real-Time Simulation of hydraulic systems at the Fluid Power Laboratory from the Power Engineering Department of the University POLITEHNICA of Bucharest. Currently, he is working as control engineer in HONEYWELL CORPORATION subsidiary of Romania.