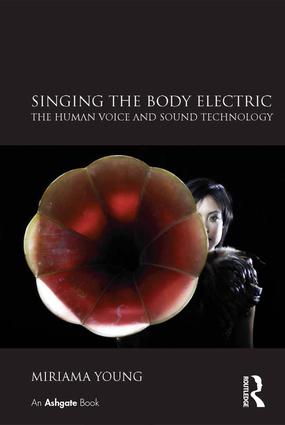 Singing the Body Electric: The Human Voice and Sound Technology

Singing the Body Electric explores the relationship between the human voice and technology, offering startling insights into the ways in which technological mediation affects our understanding of the voice, and more generally, the human body. From the phonautograph to magnetic tape and now to digital sampling, Miriama Young visits particular musical and literary works that define a century-and-a-half of recorded sound. She discusses the way in which the human voice is captured, transformed or synthesised through technology. This includes the sampled voice, the mechanical voice, the technologically modified voice, the pliable voice of the digital era, and the phenomenon by which humans mimic the sounding traits of the machine. The book draws from key electro-vocal works spanning a range of genres - from Luciano Berio's Thema: Omaggio a Joyce to Radiohead, from Alvin Lucier's I Am Sitting in a Room, to Björk, and from Pierre Henry's Variations on a Door and a Sigh to Christian Marclay's Maria Callas. In essence, this book transcends time and musical style to reflect on the way in which the machine transforms our experience of the voice. The chapters are interpolated by conversations with five composers who work creatively with the voice and technology: Trevor Wishart, Katharine Norman, Paul Lansky, Eduardo Miranda and Bora Yoon. This book is an interdisciplinary enterprise that combines music aesthetics and musical analysis with literature and philosophy.

'Miriama Young has produced an excellent piece of work. The subject, the voice and recording technology and its use in music and musical contexts is relatively new, or is at least coincident with the advent of editable recording technology since the war. The non-linear approach that Miriama takes, partly narrative, partly anecdotal and partly historical, works particularly well with this subject. I also especially like the way she includes discussions of music from popular culture, blurring the boundaries between categories and genres.'

Miriama Young is a writer, sound artist and composer. Originally from New Zealand, she gained her PhD from Princeton (2007) on a Fulbright award. She writes music for film, dance, radio, live electronics and fixed media, voices and instruments. She is a Lecturer in Sonic Arts and Music Composition at the University of New South Wales, Sydney, Australia.