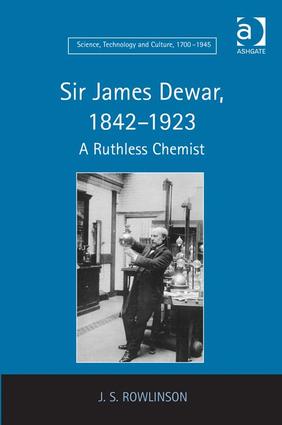 Sir James Dewar was a major figure in British chemistry for around 40 years. He held the posts of Jacksonian Professor of Natural Philosophy at Cambridge (1875-1923) and Fullerian Professor of Chemistry at the Royal Institution (1877-1923) and is remembered principally for his efforts to liquefy hydrogen successfully in the field that would come to be known as cryogenics. His experiments in this field led him to develop the vacuum flask, now more commonly known as the thermos, and in 1898 he was the first person to successfully liquefy hydrogen. A man of many interests, he was also, with Frederick Abel, the inventor of explosive cordite, an achievement that involved him in a major legal battle with Alfred Nobel. Indeed, Dewar's career saw him involved in a number of public quarrels with fellow scientists; he was a fierce and sometimes unscrupulous defender of his rights and his claims to priority in a way that throws much light on the scientific spirit and practice of his day. This, the first scholarly biography of Dewar, seeks to resurrect and reinterpret a man who was a giant of his time, but is now sadly overlooked. In so doing, the book will shed much new light on the scientific culture of the late-nineteenth and early-twentieth centuries and the development of the field of chemistry in Britain.

'… Rowlinson paints a clear picture of Dewar in this biography… Recommended.' Choice 'John Rowlinson’s book meets an important need and I recommend it to readers who, like me, are fascinated by the lives of the great scientists who contributed so much to our subject at the dawn of the twentieth century.' Royal Society of Chemistry Historical Group Newsletter 'The book is attractively presented with useful illustrations… Referencing is exemplary, and the chemistry is well explained with an erudite appendix on gas liquefaction. The book should interest both chemists and historians, and will surely remain the standard biography of a remarkable man.' Chemistry World 'This is a biography that will be read with pleasure by both historians and physical scientists. It deals concisely with the extraordinary range of Dewar’s work, leaving few stones unturned… The book captures Dewar’s difficult personality wonderfully and, without disguising his many faults and unpleasant characteristics, renders him the complete, dedicated scientist. Overall, Dewar emerges as a heroic figure, despite the unsightly warts, and above all one of Britain’s greatest experimental scientists.' Notes and Records of the Royal Society 'Unlike many biographies of scientists by professional historians and science journalists in which little is said of the scientist’s actual laboratory work for fear it will turn off the lay reader, Rowlinson takes great pains to explain the nature of Dewar’s work and has included many diagrams illustrating the apparatus used.' Bulletin for the History of Chemistry 'The book’s major strength is Rowlinson’s ability to explain contemporary problems in chemistry in a way that does not make the theories we know now seem inevitable. He also has a good eye for observations and quotations that bring to life chemists and their personalities.' British Journal for the History of Science 'With Rowlinson’s fine biography, James Dewar has finally been se

Professor Sir John Rowlinson was Dr Lee's Professor of Chemistry at the University of Oxford and is a Fellow of Exeter College. He is a Fellow of the Royal Society and of the Royal Academy of Engineering. He received the Edelstein Award from the American Chemical Society in 2008 for his contributions to the history of chemistry.

Science, Technology and Culture, 1700-1945 focuses on the social, cultural, industrial and economic contexts of science and technology from the ‘scientific revolution’ up to the Second World War. Publishing lively, original, innovative research across a broad spectrum of subjects and genres by an international list of authors, the series has a global compass that concerns the development of modern science in all regions of the world. Subjects may range from close studies of particular sciences and problems to cultural and social histories of science, technology and biomedicine; accounts of scientific travel and exploration; transnational histories of scientific and technological change; monographs examining instruments, their makers and users; the material and visual cultures of science; contextual studies of institutions and of individual scientists, engineers and popularizers of science; and well-edited volumes of essays on themes in the field.