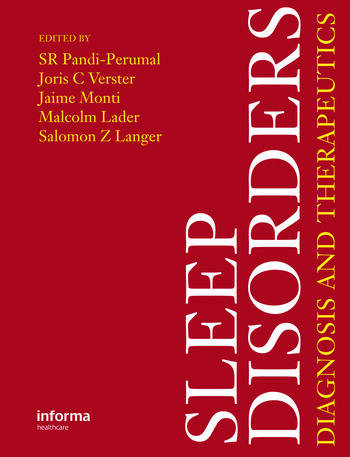 One of the first such volumes in this field, Sleep Disorders: Diagnosis and Therapeutics explores sleep pharmacology and therapeutics. Leading researchers in the area of experimental and clinical and psychopharmacology critically assess the progress in their specialist fields. The book is suitable as an introduction for clinicians and researchers who are new to sleep pharmacology and outlines the wider range of therapeutic options currently available to them. For seasoned clinicians, the book will assist in selecting the most appropriate methodologies and treatment options designed to circumvent the problems in combating sleep disorders.

S.R. Pandi-Perumal is a Sleep Disorders Specialist at the State University of New York / Downstate Medical Center (SUNY DMC) which is a major provider of medical education, healthcare, and research in the downstate New York region. He is well-recognized sleep researcher both nationally and internationally, and has authored many publications in the field of sleep, dreams, and biological rhythms. He currently holds many professional memberships, including Sleep Research Society, USA and the American Academy of Sleep Medicine, USA. His area of research interest includes sleep and biological rhythms. He has edited many books related to sleep and biological rhythms research and also an editorial member (regular) of Journal of Circadian Rhythms. He was featured in New York Times last year.

Joris C Verster is a researcher in Human Psychopharmacology at the Utrecht Institute for Pharmaceutical Sciences, University of Utrecht, the Netherlands. Verster was born in Breda, the Netherlands in 1970. He graduated in 1997 with a major in Biopsychology. In 2002, Verster became a doctor in psychology. Verster has conducted several outstanding studies in human pschopharmacology, including the residual effects of Zaleplon and Zolpidem on driving ability, cognition, memory functioning and psychomotor performance, the day following middle-of-the-night administration.

Jaime M. Monti is a Professor of Pharmacology and Therapeutics at the School of Medicine, University of the Republic, Montevideo, Uruguay. He is the director of the Sleep Research Laboratory at the Department of Pharmacology and Therapeutics at the School of Medicine. Prof. Monti received his medical degree from the University of the Republic, and completed a post-doctoral psychopharmacology research training fellowship at the University of Stanford, California, USA. Since 1970, Prof. Monti has published over one hundred and fifty peer reviewed articles and book chapters and twenty invited publications on sleep research topics. His primary research interest includes insomnia and experimental and clinical pharmacology of sleep. He has served on the editorial board of several journals, including Sleep, the Journal of Sleep Research, and Sleep Medicine Reviews, and as a Consultant to the WHO. He is a past president of Latinamerican Society of Sleep Research and the Latinamerican Society of Pharmacology and Therapeutics.

Malcolm Harold Lader is Emeritus Professor of Clinical Psychopharmacology at the Institute of Psychiatry, Kings College London, University of London. Professor Lader was also an Honorary Consultant at the Bethlem Royal and Maudsley Hospital (a Post-graduate Teaching Hospital) and conducted and supervised clinics dealing with anxiety, sleep and depressive disorders and drug treatment problems for many years. His experience in psychiatry and clinical pharmacology now extends to over 40 years. His main research interest is the drugs used in psychiatry, in particular, antidepressants and anxiolytics. These researches have resulted in the publication of 15 books and about 640 scientific articles. He has lectured widely in many countries.

He advises the UK Ministries of Health, Defence and Transport in various capacities. He is a member of other national and regional advisory committees. He is on the advisory boards of about 30 international scientific journals. Professor Lader is an adviser to the World Health Organisation on drugs used in psychiatry. He is an Honorary Fellow of the American College of Psychiatry. He has been Vice-President of the International College of Psychopharmacology, President of the Society for the Study of Addiction and President of the British Association for Psychopharmacology. Professor Lader was a member of the Committee on the Review of Medicines from 1978 – 1989, and was involved in the regulation and licensing of medicines. Professor Lader was a member of the Home Office’s Advisory Council on Misuse of Drugs from 1981-2000, and Chairman of its Technical Committee from 1984-2000, and advised on drugs of addiction.

Professor Lader trained in physiology with biochemistry, medicine, pharmacology and psychiatry and has formal qualifications in each of these disciplines. He is a Fellow of the Royal College of Psychiatrists, and of the prestigious Academy of Medical Sciences.