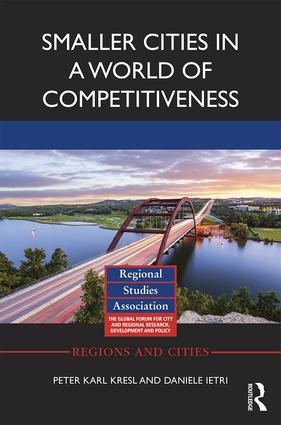 Smaller Cities in a World of Competitiveness

Much recent research in Urban Studies has concentrated on the notion of the ‘global city’ but discussion has also covered a larger set of mega cities, with populations in excess of 10 million. This analysis has begged the question of the optimal size for a city – is larger always better?

explores the advantages and disadvantages of different sized cities, trying to determine their place in the global economy and hierarchy. How can smaller cities gain or retain their competitiveness in a world of large cities? In a globalized world, the nation has perhaps been diminished as an economic actor, with fiscal shortcomings and political gridlock leaving cities more or less on their own in the task of enhancing their competitiveness and improving the economic lives of their residents. This book argues that smaller cities of varying population can be important actors in competitiveness and aims to bring attention to an area often overlooked by researchers. In short, are Pittsburgh, San Diego and Austin less competitive than London and Mumbai?

This volume will be of interest to students, researchers, and city professionals who work in urban economy and urban geography.

‘Most scholarly research on cities is focused on the great metropolitan areas of the world system. This book takes a refreshingly different approach by concentrating on small cities and what makes them attractive to large numbers of people. In doing so, the book reveals that these cities are marked by enormous diversity and often display surprisingly robust forms of economic, social and cultural life.’ — Allen J. Scott, Research Professor, UCLA, USA

Peter Karl Kresl was Professor of Economics at Bucknell University in the US for almost 40 years. He co-founded the Global Urban Competitiveness Project fifteen years ago, and remains its President today.

In today’s globalised, knowledge-driven and networked world, regions and cities have assumed heightened significance as the interconnected nodes of economic, social and cultural production, and as sites of new modes of economic governance and policy experimentation. This book series brings together incisive and critically engaged international and interdisciplinary research on this resurgence of regions and cities, and should be of interest to geographers, economists, sociologists, political scientists and cultural scholars, as well as to policy-makers involved in regional and urban development.

For more information on the Regional Studies Association, visit www.regionalstudies.org

Did you know that as a Regional Studies Association member you’re entitled to a 30% discount on all Routledge books? To order, simply email Luke McNicholas ([email protected]), or phone on +44 (0) 20 701 77545 and declare your RSA membership.