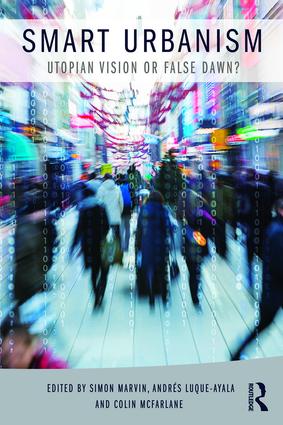 Smart Urbanism (SU) – the rebuilding of cities through the integration of digital technologies with buildings, neighbourhoods, networked infrastructures and people – is being represented as a unique emerging ‘solution’ to the majority of problems faced by cities today. SU discourses, enacted by technology companies, national governments and supranational agencies alike, claim a supremacy of urban digital technologies for managing and controlling infrastructures, achieving greater effectiveness in managing service demand and reducing carbon emissions, developing greater social interaction and community networks, providing new services around health and social care etc. Smart urbanism is being represented as the response to almost every facet of the contemporary urban question.

This book explores this common conception of the problematic of smart urbanism and critically address what new capabilities are being created by whom and with what exclusions; how these are being developed - and contested; where is this happening both within and between cities; and, with what sorts of social and material consequences. The aim of the book is to identify and convene a currently fragmented and disconnected group of researchers, commentators, developers and users from both within and outside the mainstream SU discourse, including several of those that adopt a more critical perspective, to assess ‘what’ problems of the city smartness can address

The volume provides the first internationally comparative assessment of SU in cities of the global north and south, critically evaluates whether current visions of SU are able to achieve their potential; and then identifies alternative trajectories for SU that hold radical promise for reshaping cities.

'This collection of essays is destined to become a key reference point in debates about smart cities. The contributors offer a rich series of theoretically informed case studies that critically examine the discourses, infrastructures and practices that constitute "smart"; together they significantly advance our understanding of the histories and geographies of smart cities as well as the diversities and uncertainties of their governance, economics, sustainability and sociality.'

Gillian Rose, Professor of Cultural Geography at The Open University, UK, and Fellow of the British Academy

‘Smart Urbanism’ is a major reference point in key debates about smart urban governance. The rich and theoretically informed case studies on the Global North and South as well make the book a must-read for graduate students and early career researchers in urban studies.