Social Exclusion and Justice in India 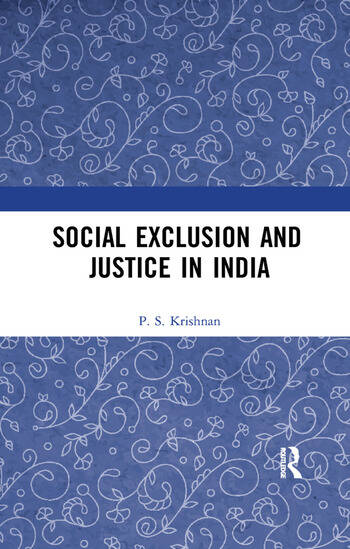 Social Exclusion and Justice in India

This book draws upon nearly seven decades of first-hand experiences from the ground to understand social exclusion, and movements and efforts for social justice in India. The author, a renowned champion of social justice for deprived social classes, delves into the roots of discrimination in Indian society as well as explains why caste discrimination still persists and how it can be effectively countered. The volume:

The book will interest scholars and researchers of social exclusion and social justice, Dalit, Adivasi and Backward Classes studies, sociology and social anthropology, politics, law and human rights, as well as policy-makers, think tanks and NGOs in the field.

is a former member of the Indian Administrative Service (IAS) and has been actively working for the cause of the advancement and empowerment of the deprived social categories of Indian society, the Scheduled Castes, Scheduled Tribes and Backward Classes, for over nearly seven decades including his 35-year career in the IAS. He has been Secretary, Ministry of Welfare, Government of India; Member, National Commission for Scheduled Castes and Scheduled Tribes; Member-Secretary, National Commission for Backward Classes; and Chairman/Member of different Steering Committees and Working Groups of India’s Planning Commission. He has been Honorary Advisor to the central government and certain State governments in matters relating to the disadvantaged social categories and guides many social organizations and activists. He has published books, papers and articles extensively.