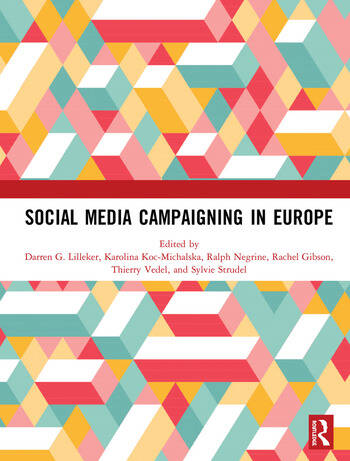 Studies of election campaigns have shown an increased employment of websites, weblog tools, email, and social media by political campaigners, as well as the use of similar platforms by citizens to find information, communicate about elections or engage more generally in political issues. This comprehensive volume explores the ways in which social media is used on the one hand as a campaigning tool, and on the other, by local citizens. It aims to develop a more holistic and Eurocentric research agenda by capturing both supply and demand practices at the European level. The authors employ both single and multination case studies, furthering debates on how political actors and voters embrace the new information and communication environment, in what ways, and for what purposes. The book offers new perspectives on social media campaigning within European democracies, thereby contributing to a more global and comprehensive understanding of how campaigning is affected, and might be enhanced, by developing an interactive digital strategy.

This book will be of great interest to students of both politics and media studies. It was originally published as a special issue of the Journal of Information Technology & Politics.

3. The role of gender in online campaigning: Swedish candidates’ motives and use of social media during the European election 2014 Linn A. C Sandberg and Patrik Öhberg

6. When David and Goliath campaign online: The effects of digital media use during electoral campaigns on vote for small parties Carol Galais and Ana Sofía Cardenal

8. Personalization of Politics Between Television and the Internet: Leader Effects in the 2013 Italian Parliamentary Election Diego Garzia

is Associate Professor at Audencia Business School and Associated Researcher at CEVIPOF Sciences-Po Paris, France. Her research focuses on the strategies of political actors in the online environment and citizens’ political engagement, where she employs comparative approach focusing on the U.S. and European countries.

is Professor of Politics at the University of Manchester, UK. Her research focuses on how digital technologies are changing the way in which election campaigns are fought and won. She is interested in comparative research and has a particular focus on developments in the UK, the U.S., Australia, and France.

is a CNRS Senior Research Fellow with the Center for Political Research at Sciences-Po Paris, France.