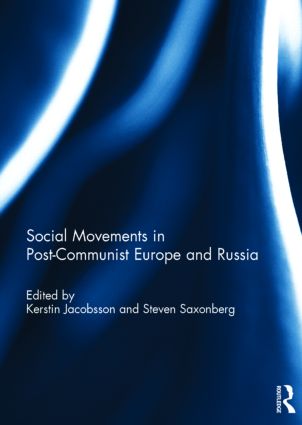 This volume provides a much needed update on the state of civil society in post-communist Europe and Russia more than two decades after the fall of the communist regimes. The chapters offer new perspectives on social movement strategies in post-communist Central-Eastern Europe and Russia. The chapters illustrate how social movements develop particular repertoires of action and contention, which are better suited for their specific local contexts in the post-communist setting. In Russia and Poland, the use of domestic and transnational legal opportunities, judicial activism and litigation is a popular strategy complementing the traditional lobbying and mass mobilization. Human rights framing has become important in Hungary and the Czech Republic. The chapters analyse various types of rights-based activism that operate in otherwise prohibitive social and political environments, thereby raising highly contentious issues, such as animal rights, environment and sustainability, human rights, women’s rights, and gay rights activism. The contributions richly illustrate the often surprising and multiple ways in which transnational discourses and norm pressure are received, translated or resisted in the local contexts. Finally, the volume provides a novel reconceptualisation and offers new understandings of the relationships between the state and civil society in the post-communist context.

This book is based on a special issue of East European Politics.

1. Introduction: A new look at social movements and civil society in post-communist Russia and Poland 2. Disciplining the ‘Second World’: The Relationship between Transnational and Local Forces in Contemporary Hungarian Women’s Social Movements 3. Does the EU help or hinder gay-rights movements in post-communist Europe? The case of Poland 4. Fragmentation of the collective action space: the animal rights movement in Poland 5. The diffusion of public interest mobilisation: a historical sociology perspective on advocates without members in the post-communist Czech Republic 6. Civil society and the state intertwined: the case of disability NGOs in Russia 7. State-sponsored civic associations in Russia: systemic integration or the ‘war of position’?

Steven Saxonberg has published extensively about the collapse of communism and the development of post-communist social policies and social movements. His recent books are: Gendering Family Policies in Post-Communist Europe: A Historical-Institutional Analysis (Palgrave, forthcoming) and Transitions and Non-Transitions from Communism: Regime Survival in China, Cuba, North Korea, and Vietnam (Cambridge University Press, 2013).