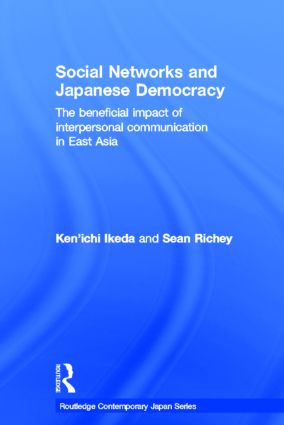 Many who critique democracy as practiced in East Asia suggest that the Confucian political culture of these nations prevents democracy from being the robust participatory type, and limits it to a spectacle designed to create obedience from the public. Certainly some East Asian nations have had elections for decades, but for democracy to be meaningful, a country needs an active public sphere, political tolerance, egalitarian beliefs, and vigorous political participation. The Asian-values debate focuses on whether the creation of this optimal version of democracy in East Asian nations will be hindered by their shared Confucian cultural heritage and at the centre of this debate is whether there is an active political culture in East Asia that allows citizens to freely discuss, debate, and disagree about politics.

With Japan as its focus, this book examines the role of social networks and political discussion in Japanese political culture and asks whether discursive participatory democracy is indeed possible in East Asia. In order to answer this question the authors undertook the largest academic political survey ever conducted in Japan to give the book exceptional empirical credence. This data reveals how the Japanese people interact politically, concluding that through the powerful influence of social networks on Japanese political behaviour, Japan has a more globalized and less hierarchical society where Confucian culture is not dominant and where creation of a vibrant civil society is possible.

This book will be invaluable for students and scholars of Japanese politics, democracy, civil society, and globalization.

"This is an interesting book that deals with the essential topic of the generalizability of democracy in countries with East Asian cultural values and, specifically, Confucian values in Japan… The text will be of clear benefit to scholars of politics and democracy in Japan as well as those interested in Japan studies, in general." - Gloria Garcia, ICADE Business School, University of Tokyo; Journal of International and Global Studies Volume 4, Number 1, (November 2012).

Ken'ichi Ikeda is Professor of Social Psychology at the University of Tokyo, Japan. Sean Richey is Assistant Professor of Political Science at Georgia State University, USA.