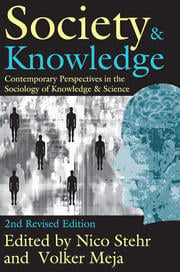 Society and Knowledge: Contemporary Perspectives in the Sociology of Knowledge and Science

The sociology of knowledge is generally seen as part of the sociology of cultural products. Along with the sociology of science, it explores the social character of science and in particular the social production of scientific knowledge. Knowledge in all its varieties is of crucial importance in social, political, and economic relations in modern society. Yet new realities, the editors argue in their introduction to this second edition, require a new perspective.

In the past half century, the social role of knowledge has changed profoundly. The natural attitude toward scientific knowledge in science that assigned a special status to science's knowledge claims has lost its dominance, and the view that all knowledge is socially constructed has gained general acceptance. Science increasingly influences the political agenda in modern societies. Consequently, a new political field has emerged: knowledge politics.

These fourteen essays by social scientists, philosophers, and historians cover fundamental issues, theoretical perspectives, knowledge and power, and empirical studies. Eight of the fourteen contributions were part of the first edition of Society and Knowledge, published in 1984, and most of these have been updated and revised for this new edition. Included in this edition are six new contributions by Robert K. Merton, Steve Fuller, Dick Pels, Nico Stehr, Barry Schwartz, and Michael Lynch.

This second, revised edition builds on its predecessor in presenting cutting-edge theoretical and empirical efforts to transform the sociology of knowledge. Professionals, policymakers, and graduate students in the fields of sociology, political science, and social science will find this volume of interest and importance.