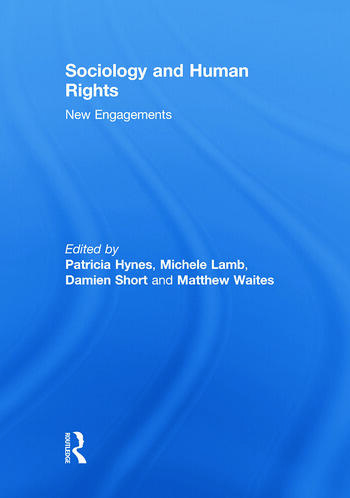 Sociology and Human Rights: New Engagements is the first collection to focus on the contribution sociological approaches can make to analysis of human rights. Taking forward the sociology of human rights which emerged from the 1990s, it presents innovative analyses of global human rights struggles by new and established authors. The collection includes a range of new work addressing issues such as genocide in relation to indigenous peoples, rights-based approaches in development work, trafficking of children, and children’s rights in relation to political struggles for the decriminalisation of same-sex sexual activity in India. It examines contexts ranging from Rwanda and South Korea to Northern Ireland and the city of Barcelona.

The collection as a whole will be of interest to students and academics working in various disciplines such as politics, law and social policy, and to practitioners working on human rights for various governmental and non-governmental organisations, as well as to sociologists seeking to develop understanding of the sociology of human rights.

This book was published as a special issue of the International Journal of Human Rights.

1. Sociology and Human Rights: Confrontations, Evasions and New Engagements  2. Cultural Genocide and Indigenous Peoples: A Sociological Approach  3. Who’s Human? Developing Sociological Understandings of the Rights of Women Raped in Conflict  4. Sociology and Human Rights: What have they got to say about Care and Dignity?  5. Contestations over Rights: From establishment to implementation of the National Basic Livelihood Security System in South Korea  6. Human rights and cities: the Barcelona Office for Non-Discrimination and its work for migrants  7. From ‘rights-based’ to ‘rights-framed’ approaches: A social constructionist view of human rights practice  8. Reconstructing Rwanda: Balancing Human Rights and the Promotion of National Reconciliation  9. Global Points of ‘Vulnerability’: Understanding Processes of the Trafficking of Children and Young People into, within and out of the UK  10. Human Rights, Sexual Orientation and the Generation of Childhoods: Analysing the Partial Decriminalization of ‘Unnatural Offences’ in India  11. Loyalty and Human Rights: Liminality and Social Action in a Divided Society

Patricia Hynes is Senior Research Officer at the National Society for the Prevention of Cruelty to Children in the UK. Her research interests include forced migration, trafficking, and refugee and asylum policy. She has published internationally including for the Office of the United Nations High Commissioner for Refugees (UNHCR) and in the Journal of Refugee Studies.

Michele Lamb is Lecturer in Human Rights at the Department of Social Sciences at Roehampton University, United Kingdom, and is the founder of the British Sociological Association’s Sociology of Rights Study Group. She has conducted research on human rights in India, for the Scottish Human Rights Commission, and in Northern Ireland, from which she has published journal articles.

Damien Short is Senior Lecturer in Human Rights at the Institute of Commonwealth Studies, School of Advanced Study, University of London, United Kingdom. His research interests include indigenous people’s rights, reconciliation projects, transitional justice and genocide; he is author of Reconciliation and Colonial Power: Indigenous Rights in Australia (Ashgate, 2008), and has published articles in journals including Current Sociology and Citizenship Studies.

Matthew Waites is Senior Lecturer in Sociology in the School of Social and Political Sciences at the University of Glasgow in the United Kingdom. He is author of The Age of Consent: Young People, Sexuality and Citizenship (Palgrave Macmillan, 2005), and co-editor with Kelly Kollman of ‘The Global Politics of LGBT Human Rights’, a special issue of Contemporary Politics Vol. 15, no. 1 (March 2009).