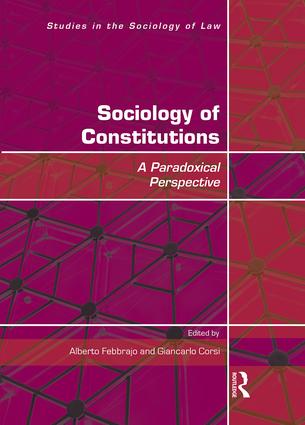 This collection brings together some of the most influential sociologists of law to confront the challenges of current transnational constitutionalism. It shows the constitution appearing in a new light: no longer as an essential factor of unity and stabilisation but as a potential defence of pluralism and innovation.

The first part of the book is devoted to the analysis of the concept of constitution, highlighting the elements that can contribute from a socio-legal perspective, to clarifying the principle meanings attributed to the constitution. The study goes on to analyse some concrete aspects of the functioning of constitutions in contemporary society. In applying Luhmann’s General Systems Theory to a comparative analysis of the concept of constitution, the work contributes to a better understanding of this traditional concept in both its institutionalised and functional aspects.

Defining the constitution’s contents and functions both at the conceptual level and by taking empirical issues of particular comparative interest into account, this study will be of importance to scholars and students of sociology of law, sociology of politics and comparative public law.

‘Febbrajo and Corsi have collected a number of highly innovative contributions to the global scholarly debate on constitutionalism. By referring to paradoxes of constitutions, to their role as "problem and solution" the book offers a most sophisticated and fruitful perspective on constitutions as central figures of modern society.’

‘This book brings together European and non-European experts to reflect on the different forms that constitutional roles may take and the paradoxes triggered by them. It discusses current problems and presents possible solutions, and at the same time examines the paradoxes that are developing. The result is an outstanding text that approaches this complex issue from a perspective closely related to social systems theory, developed by Niklas Luhmann, as well as proposing new concepts and elaborate theoretical connections.’

‘Sociology of Constitutions presents a refreshing and innovative take on an old question: how to observe the evolution of society through the lens of the legal system? In order to achieve their goals, the editors bring together la créme de la créme of the sociology of law. Using the modern phenomenon of constitutions, the chapters discuss the great paradox of the structural coupling of law and the political system: constitutions are the basis of the legitimation of politics and politics provides legitimacy for constitutions. This volume confronts the view that this is the cause of the breakdown of the legal system in modern society.’

‘This work represents a defining moment for those who seriously want to think about systems theory in relation to the constitution, reflecting on its limits and possibilities. The book is mandatory for those who want to unravel the paradoxes of modern constitutions and build new perspectives.’

The objectives of Studies in the Sociology of Law are threefold. First, the series aims to deepen the analysis of the socio-legal problems related to the enlarged European Union and the different paths of its constitutional process and policy. Second, it examines the many facets of legal cultures within and outside the European context in comparative perspective and in an open debate with extra European scholarship. Third, it focuses on the legacy of European legal thought while dealing with the new challenges of contemporary societies. Accordingly, the series adopts a line of enquiry that emphasizes the broader dynamic of legal cultures.