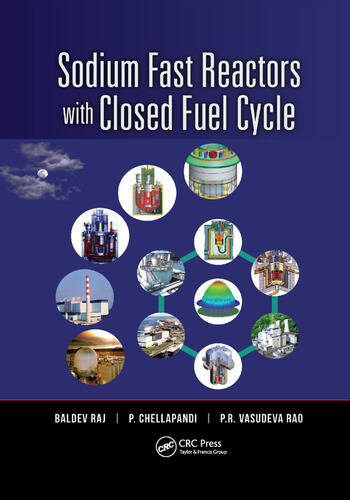 delivers a detailed discussion of an important technology that is being harnessed for commercial energy production in many parts of the world. Presenting the state of the art of sodium-cooled fast reactors with closed fuel cycles, this book:

Sodium Fast Reactors with Closed Fuel Cycle is a valuable reference for industry professionals involved in the construction of fast-reactor power plants, as well as graduate-level engineering students of the design and development of sodium-cooled fast-reactor systems and components.

Baldev Raj, BE, Ph.D, served the Department of Atomic Energy, India over a 42-year period until 2011. As distinguished scientist and director, Indira Gandhi Centre of Atomic Research, Kalpakkam, India (IGCAR), he has advanced several challenging technologies, especially those related to the fast breeder test reactor and the prototype fast breeder reactor. Dr. Raj pioneered the application of nondestructive examination (NDE) for basic research using acoustic and electromagnetic techniques in a variety of materials and components. He is also responsible for realizing societal applications of NDE in areas related to cultural heritage and medical diagnosis. He is the author of more than 970 refereed publications, 70 books, and special journal volumes, and more than 20 contributions to encyclopedias and handbooks, as well as the owner of 29 patents. He is immediate past president, International Institute of Welding and President, Indian National Academy of Engineering. He assumed responsibilities as the director of the National Institute of Advanced Studies, Bangalore, India in September 2014. He is a fellow of all science and engineering academies in India; member of the German Academy of Sciences; honorary member of the International Medical Sciences Academy; member of the International Nuclear Energy Academy; vice president, nondestructive testing, Academia International; and president-elect of the International Council of Academies of Engineering and Technological Sciences.

, BE (Hons.), M.Tech., Ph.D, is currently a distinguished scientist and director of the Reactor Design Group at the IGCAR. He specializes in reactor design, thermal hydraulics, structural mechanics, safety analysis, and experimental simulations. He is one of the key persons involved in the design and development activities of the 500 MWe prototype fast breeder reactor (PFBR) since its inception. He has contributed significantly for the PFBR over a wide spectrum of design, analysis, qualification, and research activities, also involving academic and R&D institutions in the country. His current responsibilities include design of advanced oxide and metallic fast breeder reactors planned by the department. He is a senior professor at Homi Bhabha National Institute and has published about 130 journal papers. He is a fellow at the Indian National Academy of Engineering. He is the recipient of the Homi Bhabha Science and Technology Award; the Indian Nuclear Society Award; the Vasvik Award; the National Design Award in Mechanical Engineering from Institute of Electrical and Electronics Engineers; the Agni Award for Excellence in Self-Reliance from Defence Research and Development Organization; the Department of Atomic Energy (DAE) Group Achievement Award for the design, manufacture, and erection of PFBR reactor assembly components; and the Distinguished Alumnus Award from the Indian Institute of Technology, Chennai.

, B.Sc., Ph.D, is the director of the IGCAR and the General Services Organization at Kalpakkam, India. After graduating from Vivekananda College, Chennai, India, he joined the DAE in the 16th batch of Bhabha Atomic Research Centre training school. He was instrumental in the setting up of the Radiochemistry Laboratory at the IGCAR. He is an expert in the area of fast reactor fuel cycle, especially the back-end fuel cycle. He is a recipient of the Indian Nuclear Society Award (2007) for his contributions to the area of nuclear fuel cycle technologies. He was selected for the Material Research Society of India (MRSI) medal lecture in 1998 and MRSI-ICSC Superconductivity and Materials Science Senior Award in 2011. He was also selected for the award of the Silver Medal by the Chemical Research Society of India in 2011. He is a senior professor at the Homi Bhabha National Institute. He has nearly 250 publications in peer-reviewed international journals. His areas of interest include the development of technologies for fast reactors and associated fuel cycles, actinide separations, and education in the field of chemical sciences.

"…I think this book will be useful for students and post-graduate students having specializations in various areas of SFR technology. …Chapters include a lot of world experience related to SFR designing and construction and are well illustrated… I will be glad to have this book on my table."
—Yury Ashurko, State Scientific Centre of the Russian Federation – Institute for Physics and Power Engineering (SSC RF-IPPE)

"A comprehensive source book providing information about various aspects of fast reactors and their associated fuel cycles would be of significant value for experts, as well as for younger-generation professionals aspiring to take up challenging R&D programs in designing and building fast reactor systems. I am delighted that such a book on fast reactors has been made a reality by my colleagues, Dr. Baldev Raj, Dr. P. Chellapandi, and Dr. P.R. Vasudeva Rao. I congratulate them for their fine efforts in preparing this comprehensive treatise on this important subject."
—R.K. Sinha, Secretary, Department of Atomic Energy and Chairman, Atomic Energy Commission, Mumbai, India