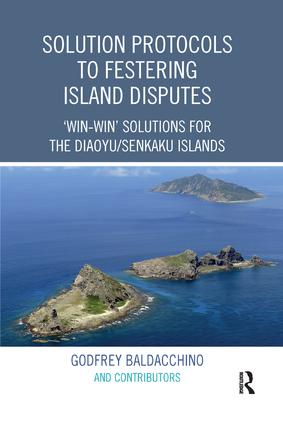 Since the coming into force of the United Nations Law of the Sea, states have been targeting outlying islands to expand their exclusive economic zones, simultaneously stirring up strident nationalism when such plans clash with those of neighbouring states. No such actions have brought the world closer to the brink of war than the ongoing face-off between China and Japan over the Diaoyu/Senkaku islands, an uninhabited archipelago in the East China Sea.

In this timely and original book, Godfrey Baldacchino provides a detailed exploration of seven tried and tested solution protocols that have led to innovative 'win-win' solutions to island disputes over the last four centuries. A closer look at the circumstances and processes that brought contending regional powers to an honourable, even mutually advantageous, settlement over islands provides a convincing and original argument as to why the conflict over the Diaoyu/Senkaku islands need not conclude in a ‘zero-sum’ or 'winner takes all' solution, as is the likely outcome of both open conflict and international arbitration.

The book will be of interest to scholars and practitioners concerned with the festering Diaoyu/Senkaku dispute, as well as students, scholars and policy specialists in geography, geopolitics, international relations, conflict studies, island studies, Asian studies and history.

2. Context: churn in the Asia-Pacific

3. The China‒Japan relationship through the ages

5. Worth nothing, yet worth everything: why countries (may) go to war over small islands

6. A genealogy of creative governance

11. Shelving (or setting aside) dispute while developing

13. Status quo (or stalemate or standstill)

Epilogue I: The Diaoyu/Senkaku islands dispute and future development of Sino-Japanese relations

Godfrey Baldacchino is Pro-Rector (International Development) and Professor of Sociology at the University of Malta and UNESCO Co-Chair (Island Studies and Sustainability) at the University of Prince Edward Island, Canada. He is also President of the International Small Islands Studies Association, Chair of the Scientific Board of RETI (The Network of Island Universities) and Founding Executive Editor of Island Studies Journal.

Christian Fleury is research fellow at the University of Caen-Normandie, France

Pamila Gupta is associate professor at the University of Witwatersrand, South Africa

Steven Hillebrink is with the Directorate for Constitutional Affairs, Ministry of the Interior and Kingdom Affairs, the Netherlands

Akihiro Iwashita is professor of history and area/Slavic studies, University of Hokkaido, Japan

Mari Katayanagi is professor at the graduate school for international development and cooperation, Hiroshima University, Japan

David McIntyre is emeritus professor of history at the University of Canterbury, New Zealand

Jouke van Dijk is professor at the Department of Economic Geography at the University of Groningen and Director of the Waddenacademie, The Netherlands