Songs and Musicians in the Fifteenth Century 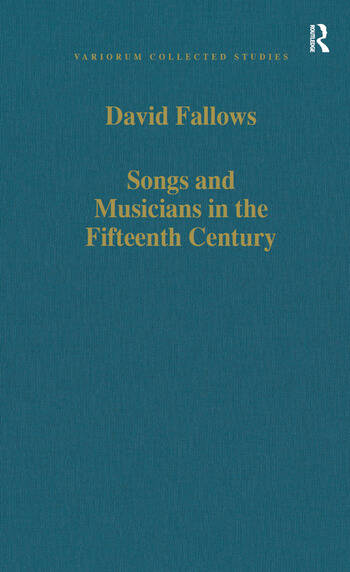 Songs and Musicians in the Fifteenth Century

The essays in this volume are concerned with song repertories and performance practice in 15th-century Europe. The first group of studies arises from the author's long-term fascination with the widely dispersed traces of English song and , in particular, with the most successful song by any English composer, O rosa bella. This leads to a set of enquiries into the distribution and international currents of the song repertory in Italy and Spain. The essays in the final section, taken together, represent an extended discussion of the problems of performance, both of voice and instrument, what they performed and how.

Contents: English song repertories of the mid-fifteenth century; Robertus de Anglia and the Oporto song collection; Review of Julia Boffey: Manuscripts of English Courtly Love Lyrics in the later Middle Ages; Dunstable, Bedyngham and O rosa bella; The contenance angloise: English influence on continental composers of the fifteenth century; French as a courtly language in fifteenth-century Italy: the musical evidence; A glimpse of the lost years: Spanish polyphonic song, 1450-70; Polyphonic song in the Florence of Lorenzo’s youth, ossia: the provenance of the manuscript Berlin 78.C.28: Naples or Florence?; Prenez sur moy: Okeghem’s tonal pun; Texting in the chansonnier of Jean de Montchenu; Specific information on the ensembles for composed polyphony, 1400-1474; The performing ensembles in Josquin’s sacred music; 15th-century tablatures for plucked instruments: a summary, a revision and a suggestion; Embellishment and Urtext in the fifteenth-century song repertories; Additions and Corrections; Index of names and texts; Index of manuscripts.

'Congratulations to Variorum...for including this in their series.' Early Music Review