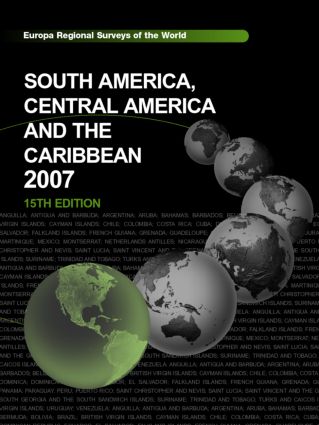 Thoroughly revised and updated analytical articles written by acknowledged experts covering issues of regional importance are examined by acknowledged authorities of the area, subjects covered include: Religion in Twenty-First Century Latin America; Indigenous Peoples in Latin America in the Twenty-First Century; The Geopolitics of Relations in North America: A Mexican Perspective; El Niño: A Latin American Phenomenon? ; Combating Money-Laundering and Terrorist Financing in the Caribbean; Debt, Finance and the IMF; The Andean Regional Initiative; and Central America and 'El Norte': an Introduction to Latin American Politics.

Individual chapters on each country and territory incorporating:

'This is a magnificent compilation of timely information on an area of the world for which reliable data is often in short supply.' - American Reference Book Annual

'Remains an exemplary reference work for students of the area.' - International Affairs