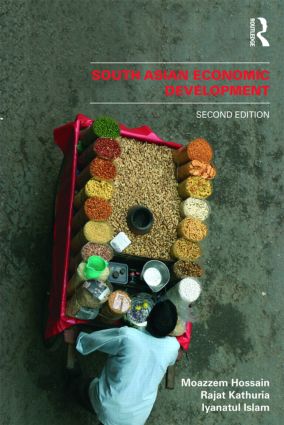 South Asia's developing nations have been enjoying moderate to high growth over the past decade before the global recession began. This new edition provides an up-to-date guide to the growing markets in South Asia. It offers an analysis of the changes and consequences of high sustainable growth, investigating what has been achieved in the region during the last ten years from a macroeconomic viewpoint, identifying new challenges and clearly defining what has driven the boom.

The first part of the textbook presents an analysis of how South Asia is rated against Southeast and East Asia in recent decades in economic and social terms. The second part of the text focuses on South Asia's economic development over 1990s and mid-2000s, and the third and final part identifies those major governance issues, which were responsible for South Asia's underperformance both socially and economically.

It is widely recognised that globalisation enhanced global trade, and that trade further increased the region’s prosperity. Embracing the view that economists can no longer regard themselves as technocratic guardians of neutral policy advice, the book advocates for a shift in focus from policy reform per se to the more challenging task of implementing institutional reform that will invigorate the capability of the political leadership to bring about rapid, sustained and poverty-reducing growth in South Asia. The central task would be to re-direct the focus of governments in South Asia in order to ensure that the core functions of the state stable, non-distortionary policy climate, a secure foundation of law, investment in basic education, health and infrastructure, protection of the vulnerable and adapting with the climate change are efficiently provided. At the same time, the reform agenda must be sensitive to the goal of ensuring that durable democratic institutions, traditions and values are preserved. This is a fundamental challenge, but one that must be met in order to secure the emergence of a prosperous South Asia in the early part of the twenty-first century.

Praise for the first edition: "This valuable volume will be an essential reference tool for years to come." - Contemporary South Asia