Spain and Portugal in the European Union
The First Fifteen Years 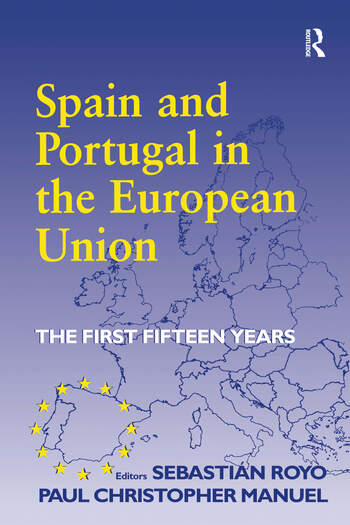 Spain and Portugal in the European Union: The First Fifteen Years

This publication provides an up-to-date assessment of the political and economic issues and is valuable reading for anyone wishing to understand contemporary Spain and Portugal.

Following decades of relative isolation under authoritarian regimes, the success of the processes of democratic transition in both countries paved the way for full membership in the European Community in 1986. Drawing on research by established scholars, Spain and Portugal in the European Union offers an original series of analyses of the development of Iberian politics, sociology and economics since the accession to the European Union.

1. Some Lessons from the 15th Anniversary of the Accession of Portugal and Spain to the European Union 2. Shaping, not Making, Democracy: The European Union and the post-authoritarian political transformations of Spain and Portugal 3. European Integration and Civil Society in Spain 4. Portugal and Eastern Europe: After the revolution, democratic Europe 5. Portuguese Attitudes Towards EU Membership: Social and political perspectives 6. Spaniards' Long March Towards Europe 7. Spanish Membership of the European Union Revisited 8. Portugal's European Integration: The good student with a bad fiscal constitution 9. Spain in the EU: 15 years may not be enough 16. Redesigning the Spanish and Portuguese Welfare States: The impact of accession into the European Union 17. The Role of the State in the Labour Market: Its impact on employment and wages in Portugal as compared with Spain 18. The 2004 Enlargement: Iberian lessons for post-communist Europe 19. Portugal and Spain: A 15 year quasi-experiment with European integration in a pair of most similar systems

'A useful contribution ... it provides some lessons that may be applicable to Eastern European countries as they pursue their own integration within the EU.' - Focus - Journal of the European Information Association