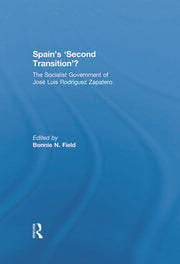 Few would have imagined the developments and the extent of reforms that occurred under Spanish Prime Minister José Luis Rodríguez Zapatero between 2004 and 2008. Under Zapatero, Spain rapidly withdrew Spanish troops from Iraq, held a very public political debate on the Spanish Civil War and the Franco dictatorship, passed very progressive social legislation that included gay marriage and adoption as well as a sweeping gender equality act, and expanded autonomy in six of Spain’s 17 regions. It has become quite common to refer to some or all of these developments as a ‘second transition’ that alters or revisits policies, institutional arrangements and political strategies that were established during Spain’s transition to democracy.

This book analyzes the patterns of continuity and change and provides a nuanced, critical evaluation of the concept of a ‘second transition’. Three broad questions are addressed. First, to what degree do the developments under Zapatero’s Socialist government represent a departure from prior patterns of Spanish politics? Second, what accounts for the continuities and departures? Finally, the project begins to assess the implications of these developments. Are there lasting effects, for example, on political participation, electoral alignments, interparty and inter-regional relations more broadly?

This book was published as a special issue of South European Society & Politics.