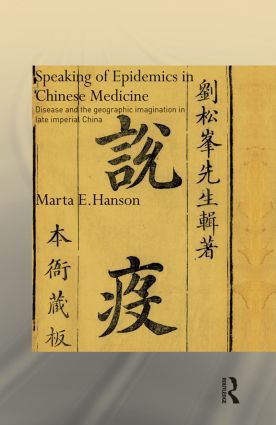 Speaking of Epidemics in Chinese Medicine

The persistence of wenbing and other Chinese disease concepts in the present can be interpreted as resistance to the narrowing of meaning in modern biomedical nosology. Attention to conceptions of disease and space reveal a previously unexamined discourse the author calls the Chinese geographic imagination. Tracing the changing meanings of "Warm diseases" over two thousand years allows for the exploration of pre-modern understandings of the nature of epidemics, their intersection with this geographic imagination, and how conceptions of geography shaped the sociology of medical practice and knowledge in late imperial China.

Speaking of Epidemics in Chinese Medicine opens a new window on interpretive themes in Chinese cultural history as well as on contemporary studies of the history of science and medicine beyond East Asia.

"Rich, detailed, and hugely impressive in scope, Marta Hanson’s history of the “warm diseases” or the wenbing disease classification, from the earliest references in the canonical medical literature through to the present day, is a welcome addition to the Needham Research Institute Series of texts on East Asian medical history… the picture she paints is not only a fantastically thorough portrait of the Chinese wenbing disease concept that will be of interest to historians of East Asian medical history, but also a richly textured landscape that reveals much about the previously unexplored intersections between geography and disease and will have a broader appeal to anyone interested in the dynamic interplay between medicine and society." - Joanna Grant; Bulletin of the History of Medicine 2013.

Marta Hanson is Assistant Professor in the Department of the History of Medicine at Johns Hopkins University, USA. Her research interests are in the history of medicine, disease, and public health in China and the cultural history of Chinese arts of memory.

Joseph Needham's 'Science and Civilisation' series began publication in the 1950s. At first, it was seen as a piece of brilliant but isolated pioneering. However, at the beginning of the twenty-first century, it is clear that Needham's work has succeeded in creating a vibrant new intellectual field in the West. The books in this series cover topics relating broadly to the practice of science, technology and medicine in East Asia, including China, Japan, Korea, and Vietnam. The emphasis is on traditional forms of knowledge and practice, but without excluding modern studies which connect the topics with their historical and cultural context.