Spies of the Kaiser
Plotting the Downfall of England 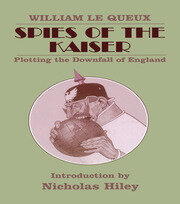 Spies of the Kaiser: Plotting the Downfall of England

Le Queux was the first and most prolific of all British spy writers, but Spies of the Kaiser was not just another tale of scheming foreigners and plucky British heroes, for this paranoid tale of German secret agents plotting the invasion of Britain played a major part in the formation of MI5, Britain's counter-espionage organisation. In his introduction, intelligence historian Nicholas Hiley explains how Le Queux's powerful blend of fact and fiction inspired a whole generation of British secret service officers, and led MI5 in a nation-wide hunt for a non-existent enemy.

worthy of its place in the history of espionage - I consider it well worth a read. Bulletin of the Military Historical Society

"As Nicholas Hiley demonstrates in his fine introduction to Spies of the Kaiser, MI5 itself owed its inspiration to the fiction of William Le Queux. Here, it appears, we have art imitating life, which is itself imitating art (of a sort)." Times Literary Supplement

"Le Queux"s novel played a significant part in the founding of the modern British intelligence community and thus fully deserves its place in the new Frank Cass series, Classics of Espionage." Christopher Andrew, The Daily Telegraph

"Frank Cass are to be congratulated on reprinting, with its original illustrations, one of Le Queux"s most influential works ... greatly enhanced by a fascinating and expert 24-page, well-referenced introduction.