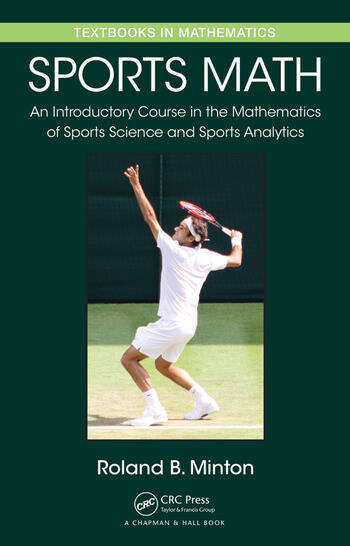 Sports Math: An Introductory Course in the Mathematics of Sports Science and Sports Analytics

Can you really keep your eye on the ball? How is massive data collection changing sports?

Sports science courses are growing in popularity. The author’s course at Roanoke College is a mix of physics, physiology, mathematics, and statistics. Many students of both genders find it exciting to think about sports. Sports problems are easy to create and state, even for students who do not live sports 24/7. Sports are part of their culture and knowledge base, and the opportunity to be an expert on some area of sports is invigorating. This should be the primary reason for the growth of mathematics of sports courses: the topic provides intrinsic motivation for students to do their best work.

"The topics covered in Sports Science and Sports Analytics courses vary widely. To use a golfing analogy, writing a book like this is like hitting a drive at a driving range; there are many directions you can go without going out of bounds. At the driving range, I pick out a small target to focus on, and that is what I have done here. I have chosen a sample of topics I find very interesting. Ideally, users of this book will have enough to choose from to suit whichever version of a sports course is being run."

"The book is very appealing to teach from as well as to learn from. Students seem to have a growing interest in ways to apply traditionally different areas to solve problems. This, coupled with an enthusiasm for sports, makes Dr. Minton’s book appealing to me."

Roland Minton is professor of Mathematics at Roanoke College, Salem, Virginia. He has taught courses in sports science since 1987.

The book is written at a level that is accessible to a large audience. It contains a small number of applications that make use of calculus; otherwise, only a high school level mathematics background is required. Furthermore, one can easily skip over those sections that require calculus and still have plenty of accessible material to read.

Sports Math is well written and easy to read. The book should appeal to anyone interested in the quantitative aspects of athletics. Each chapter of the books ends with a fairly large number of exercises and also pointers to further reading. Thus, the book could be used not only as a textbook for a course but also as a nice resource for student projects.

Minton presents a textbook based on the current status of a sport science course that has evolved since he began teaching it in 1988. He offers a sample of topics that he knows something about and finds interesting, and hopes that instructors and students will find the book useful. His topics are projectile motion, rotational motion, sports illusions, collisions, ratings systems, voting systems, saber- and other metrics, randomness in sports, sports strategies, and big data and beyond.

This work discusses how mathematics is used to analyze popular American sports like football, baseball, and basketball. Minton (mathematics, Roanoke College) has based this book on several of his undergraduate courses. The book covers two major aspects: the physics involved in sports (e.g., the motion of a ball) and the statistics used to make probabilistic ratings of performance and success. The beginning chapters consider topics from mechanics, such as “Projectile Motion,” “Rotational Motion,” and “Collisions.” The rest of the text is devoted to statistics used in sports ratings and analysis, with many examples from specific games played in the big leagues or by major colleges. The material covered is selective and quirky; the level of analytical mathematics and statistics ranges from simple to advanced, including calculus, matrixes, and game theory. Each chapter has solved examples and end-of-chapter questions, problems, and suggestions for projects. There are pictures and graphs interspersed throughout the text. The book is not suitable as a standard text in any conventional course—it will best serve as a supplement. 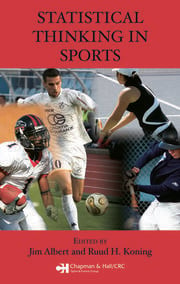