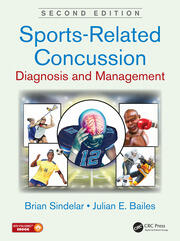 concussion. Interest in management and methodology for making diagnoses and improving the clinical outcomes have changed

dramatically. All U.S. states have laws dictating how sports concussion patients are cared for and require return to play decisions be

examples, and historical insights are featured.

, is a nationally recognized leader in neurosurgery, with special emphasis on brain tumors and the impact of brain injury on

brain function. He is Surgical Director at NorthShore Neurological Institute and Chairman of the Department of Neurosurgery at NorthShore

University HealthSystem in Evanston, Illinois. Dr. Bailes was a founding member and director of the Brain Injury Research Institute, which focuses

on the study of traumatic brain injuries and their prevention. His research has been instrumental in the understanding of the clinical evidence of

chronic traumatic encephalopathy (CTE), a progressive degenerative disease found in individuals who have been subjected to multiple

concussions and other forms of head injury.

Previously, Dr. Bailes served for 11 years as Professor and Chairman of the Department of Neurosurgery at West Virginia University School of

Medicine where he specialized in the diagnosis and surgical treatment of cerebrovascular disease, stroke and traumatic brain injury. He was the

primary treating physician of Randal McCloy Jr., the only survivor among 13 miners trapped in the 2006 Sago Mine explosion in West

Virginia—the longest period of time any survivor has been trapped underground in the United States.

As a national authority in neurosurgery, Dr. Bailes served on the NASA Crew Protection Work Group for the Orion Mars-Lunar Mission. Since

1994, he has been a neurological consultant to the NFL Players’ Association (NFLPA), which has supported research on the effects of head

injuries on retired professional athletes. He is the Medical Director of the Center for Study of Retired Athletes based at the University of North

Carolina, Chapel Hill; Medical Director of Pop Warner Football; and an adviser to the NCAA.

including five books on neurological disease. Additionally, he performs editorial duties for a number of medical journals. Dr. Bailes has been

Top Surgeons.” He has had numerous appearances on national television programs, including Dr. Oz, Good Morning America and NBC Nightly

News, and has most recently been recognized as a 2014 “Chicago Top Neurosurgeon” by Chicago Magazine.

Brian Sindelar, MD, graduated from the University of Illinois Champaign-Urbana and subsequently completed his medical education at the University of Illinois in Chicago.  He began his neurosurgery residency training at the University of Florida where he took particular interest in the surgical treatment of severe traumatic brain injury, brain tumors, and skull base pathologies through both open and minimally invasive techniques.  Throughout medical school, residency, and specifically during his time as the Neurosurgical TBI Research and Clinical fellow under the guidance of Dr. Julian Bailes, Dr. Brian Sindelar focused his attention on traumatic brain injury research.  Specifically, his scope of study focused on pre-clinical and clinical research in the spectrum of TBI including preventative measures to combat both blunt and blast induced concussion and traumatic hearing loss.  This research has led to numerous book chapters and publications that have been both locally and nationally recognized and even appraised by the Florida Neurosurgical Society, National Injury Prevention Foundation, and the American Academy of Neurological Surgeons.  Following completion of residency training in 2019, Dr. Sindelar will begin his active duty service with the United States Army where he will continue his passion in advancing the current knowledge and research in traumatic brain injury