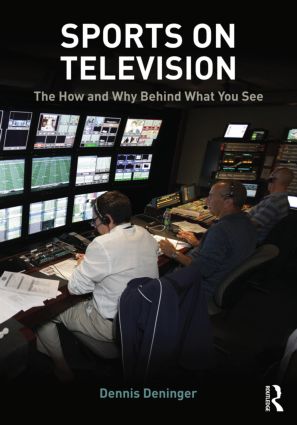 The How and Why Behind What You See, 1st Edition

In Sports on Television, Dennis Deninger provides an all-encompassing view of the sports television industry. He progresses from the need for this book, to the history of the industry and discipline, to the pioneering events of sports broadcasting and sports television, to a nuts-and bolts, behind-the-scenes look at a sports television production. All the while, he examines the impact that sports and the mass media have had (and are continuing to have) on one another and on society.

"Dennis got it right. He has a deep understanding of the history of our industry and of the process of how and why we get the sports coverage we do every day. This book is a good practical guide that puts the sports media in perspective. I'm hoping that everyone who reads this book will forever watch sports on TV in a different way." - Michael Aresco, executive vice president of CBS Sports

"Dennis Deninger is the perfect person to have written this masterful book. His long and rich experience as an event and studio producer at ESPN during the company’s formative years and his subsequent experience in the classroom, give him a unique, broad and unparalleled perspective from which to examine all aspects of the sports television business. What makes this textbook even more valuable is his clear, concise and fluid writing style as well as his enthusiasm for the material. Students, and even general readers, will gain much useful information and insight from this outstanding work." - George Veras, President & CEO of Pro Football Hall of Fame Enterprises and Emmy Award winning sports producer:

"This book is a true tour de force! It is by far the most comprehensive and in depth treatment of the subject ever, pulling together history and and the reality of sports television. It succeeds in finally giving us an overview that to date has only been available to the public in bits and pieces. It's overdue and much needed." - John Skipper, President of ESPN, and Co-Chair of Disney Media Networks:

"We live in an era when the answers to 'how' and 'why' are an Internet search away. This book provides those answers for sports television in one authoritative package." - Patrick McEnroe, television commentator and USTA general manager, player development:

"Dennis is the man who was always there behind the cameras, helping what was in front of the camera be the best it could be. If you are just starting out in sports television, this book will give you perspective and insights that you will value for your entire career." - Mary Carillo, television commentator:

"Dennis Deninger takes the reader through every aspect of the medium: from its simple beginnings to its rich and complex present, behind cameras, inside board rooms, explaining everything from tv rights to tv wrongs. This serves as a fine guidebook for anyone who wishes to understand the many layered dimensions and decisions that shape and effect how sports comes through the screen and into our homes." - Sunil Gulati, President of the US Soccer Federation:

"If you’ve been in the sports business for years, are a student beginning to plan your career, or are simply a fan of sports on television, you will find Dennis Deninger’s book fascinating and informative. Having served as coordinating producer for ESPN’s coverage of World Cup Soccer and for major tennis events around the world, Dennis brings an international perspective to the subject, connecting what we see here in the US with sports coverage worldwide. It’s a terrific read." - Steve Bornstein, President, NFL Network:

1. Television that Matters 2. Beginnings: The Decades of Experimentation and Fulfillment 3. The Modern Era Begins 4. The Pro Football Ascendancy 5. The ESPN Era 6. Programming Sports on Television 7. Producing Sports on Television 8. The Evolution of Sports Commentators 9. International Sports Broadcasting 10. Who's Watching TV Sports, and Why? 11. Advertising and Sponsorship 12. Power and Economics 13. Politics and Government in Sports Television 14. The Social and Cultural Impact of Televised Sport 15. Coming Up Next

Dennis Deninger is an Emmy-award winning television production executive and innovative educator who has produced live sports television from six continents and across the USA. He teaches at the David B. Falk College of Sport and Human Dynamics and the S. I. Newhouse School of Public Communications, both at Syracuse University, his alma mater. Deninger has created graduate and undergraduate level courses, and is the founding director of the Newhouse School’s sports communications emphasis program.

Deninger spent twenty-five years at ESPN leading production teams for studio programming, live remote events and digital video platforms. He joined ESPN in October 1982 as one of the first four coordinating producers for SportsCenter and held that position until 1986. That was the year he created the Scholastic Sports America series which continued for fifteen years on ESPN. During the course of his career at ESPN, Dennis Deninger launched more than a dozen new televised series and events including the National Spelling Bee, Major League Soccer, and Racing to the Kentucky Derby, plus he created the most successful daily sports video series in the history of the internet, SportsCenter Right Now, which was originally titled the SportsCenter Minute.

Dennis Deninger has won Emmy Awards for innovation in sports television, production on digital platforms, and educational television. He developed for American television the digital instant review technology called "Shot Spot" now in use at virtually all major tennis tournaments.

He launched ESPN’s coverage.of Wimbledon and the French Open, plus was the executive in charge of production for a dozen Australian Opens, Friday Night Fights, Triple Crown horse racing, PBA bowling and a variety of other live events.

As Coordinating Producer for World Cup ’94, Dennis Deninger was responsible for all coverage on ABC and ESPN. He and his team created the first continuously displayed sponsored score-box for live sports which has become a staple of American television.

He won an Emmy and three Parents’ Choice Awards, plus the National Clarion Award as executive producer of ESPN SportsFigures, an educational series that shows how math and science are at work in every sport.

Deninger is on the board of directors of the Cheshire Education Foundation, which works to enhance public education in Cheshire, CT. He served as an elected member of the Cheshire Board of Education from 1993-97. Each year Dennis returns to his hometown of Hornell, NY to serve as master of ceremonies for the annual "Sports Night" Special Olympics fundraiser.

Dennis resides in Cheshire, CT with his wife Gail. They have two sons, Matthew and Kevin.