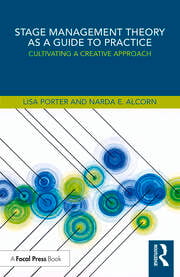 Stage Management Theory as a Guide to Practice: Cultivating a Creative Approach

Stage Management Theory as a Guide to Practice offers theory and methodology for developing a unique stage management style, preparing stage managers to develop an adaptive approach for the vast and varied scope of the production process, forge their own path, and respond to the present moment with care and creativity.

This book provides tactile adaptive strategies, enabling stage managers to navigate diverse populations, venues, and projects. Experiential stories based on extensive experience with world-renowned artists exemplify the practices and provide frameworks for self-reflection, synthesis, and engagement with theory-guided practice. This book empowers stage managers to include the ‘How You’ with ‘How To’ by flexing collaborative muscles and engaging tools to guide any collaborative project to fruition with creativity, curiosity, and the drive to build connections.

Lisa Porter is a professor of theatre and dance at the University of California, San Diego, where she has taught since 2005. She is the head of the MFA in stage management, and teaches graduate and undergraduate stage management. She has also developed courses related to creativity, neuroscience, disability, and performance. Lisa has taught in the MFA Stage Management program at Yale School of Drama, and has led international classes in Singapore, Taiwan, and China.

is a professor and stage manager who has worked on Broadway, Off-Broadway, regionally, and internationally. In 2019, Narda was appointed chair of the stage management department at Yale School of Drama. She has been head of stage management for New York University, DePaul University, and State University of New York at Purchase. She received DePaul’s Excellence in Teaching Award in 2015 and The Robert Christen Award for Excellence in Technical Collaboration in 2017.